Putting myself out there.

A few weeks ago I happened into a curtain/ knitting shop in Ennis. After talking to the shop keeper and browsing the collections of both curtains and yarn, I enquired after the lace curtains. She also let me know there was a knitting group twice a week. She handed me a few cards with info on it and I took it home, placing it on a window sill to rest for a few weeks. Almost forgetting about it. Then, this past Sunday, I remembered that it was almost Tuesday when one of the knitting groups happen. I mentioned it to Jubal that I'd like to go and he said of course. I was thoughtful about the fact that joining up with a group of people I didn't know did not fill me with anxiety. I have been to enough knitting and spinning circles to know in general what to expect and in the past the idea of doing something like this would have taken a lot more than someone I didn't know suggest I try it. For some reason, I like to really stew over things. And in doing so, I talk myself of out trying all kind of things. In general I talk myself out of taking risks with people I don't know such as putting myself out there. For reason, over the last several years I've been collecting this shell around me in order to protect me from getting hurt. I became so fixated on "getting hurt" and being wronged that I think at times it's kept me from seeing when I wasn't getting hurt AND when to stand up and say what I wanted. Sigh. More on all that later. But, being here, in Ireland, with my new husband, my other half, I've been noticing some really interesting changes in myself. I'm more decisive, articulate, I'm trying harder and more  consciously to make positive choices. Especially when it feels really hard to do so. Anyway, getting to this knitting group was something I did that I was proud of. It was a lovely 2 hours or opening up a little to 6 other women, engaging with them on their projects, listening to their conversations about their children and projects. Fascinating conversations. I helped a lady finish the toe of her sock. Actually it went like this: Irish Lady, "does anyone know what I do next? I finished the other one but someone else finished the toe for me." Me: "I can show you." She was so happy and ran over to where I sat. I pulled out my scissors and tapestry needle and started to show her, I did two stitches and then said, "so thats what you do. You just knit here and purl there until your done." "Oh! can you keep showing me?" and then she laughs with a twinkle in her eye for I then realize what she has in her mind. She wants me to do it for her:) I do happily and she is very grateful. I plan on and look forward to going back next Tuesday. I felt so good when we got home. Energized with a momentum. Later in the day I called one of my dear friends and hashed out some future plans and I felt so good and blessed for having the ability to reach out to others to connect, for whatever reason. As my friend said over the phone, "See! talking is GOOD!" 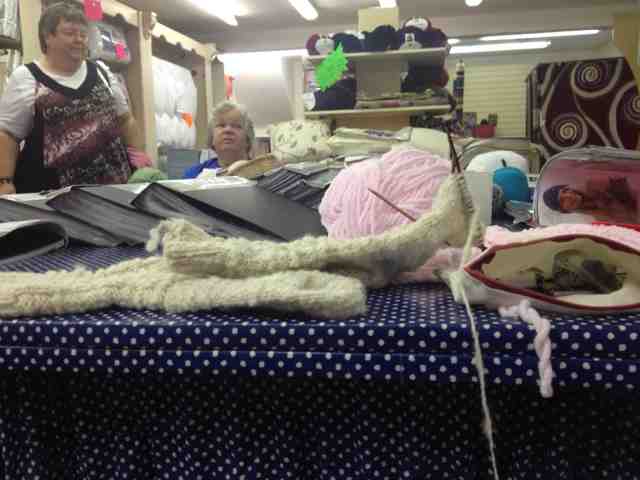 Opening ourselves up to others, even our own family members can be really difficult at times. We spend a life time working so hard building a shell of protection and self preservation both because of past experiences and the what ifs of the future. I know for myself, it can limit just how happy and how much I could shine when I hold onto my shell and not let others in. I've been slowly figuring out that through my craft, it's self, helps me to connect with others. More on this very soon <3 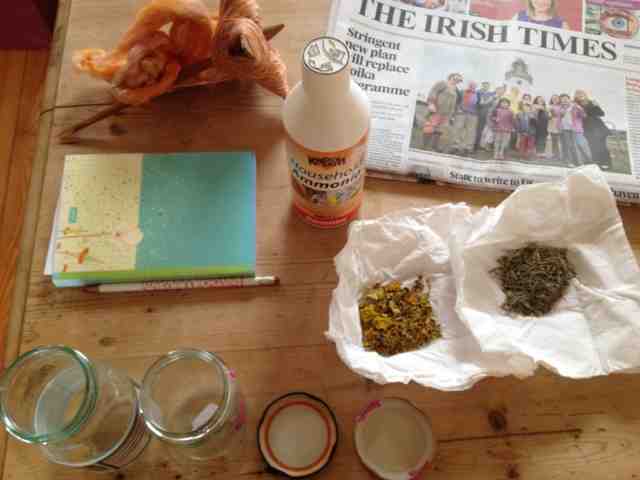 Some things I've been up to here at our cottage with the red door in Doonagore Village; lichens. 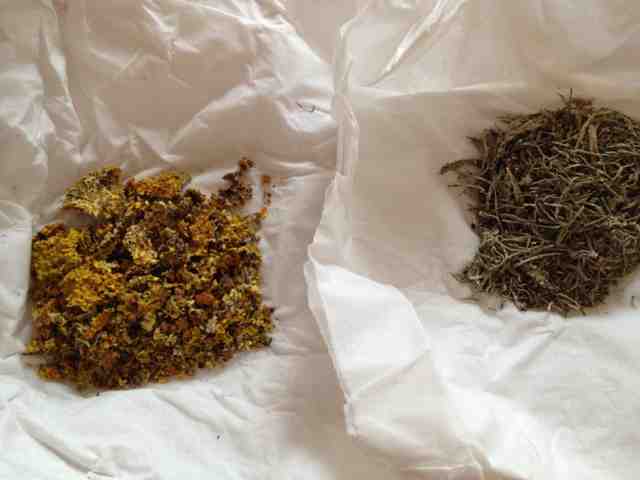 Last weekend while at the Giant's Causeway, I came across several boulders by the sea with this yellow lichen in the crevices and the green lichen sticking off the rocks. I collected just a small hand full of each leaving plenty behind. I stuffed each kind in the pockets of my trousers and sort of forgot and it for 3 days. After wearing them the next time and finding the lichen pocking me through my pocket, I folded each into its own napkin. Yesterday I began the fermenting process for these two. I was able to identify each which I will post later in the comments. 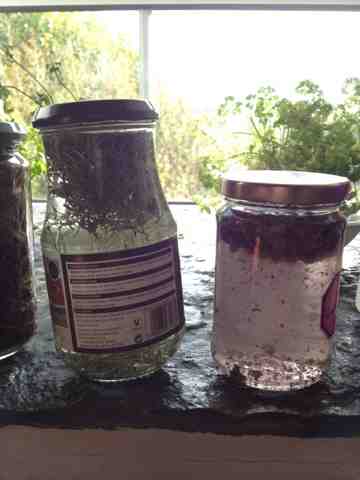 Here the jars just after being set up with the 1:2 solution of ammonia to water. 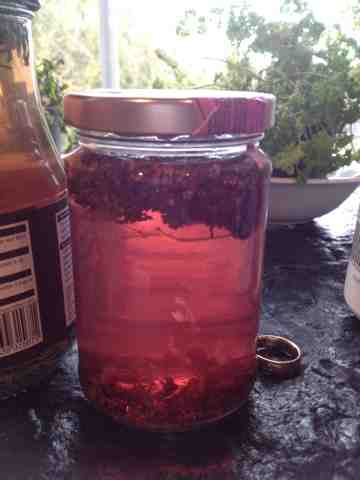 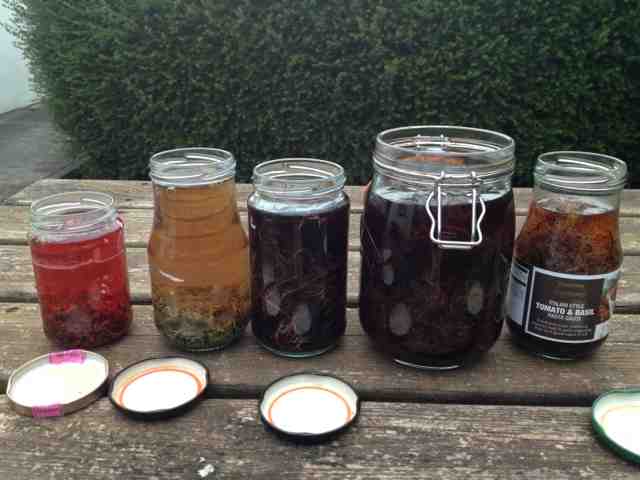 The two jars on the left are the newer ones, the two on the right have been going for 3 weeks. I read today in a blog that by opening them and letting oxygen get in was good for deepening the colors in addition to shaking the jars. 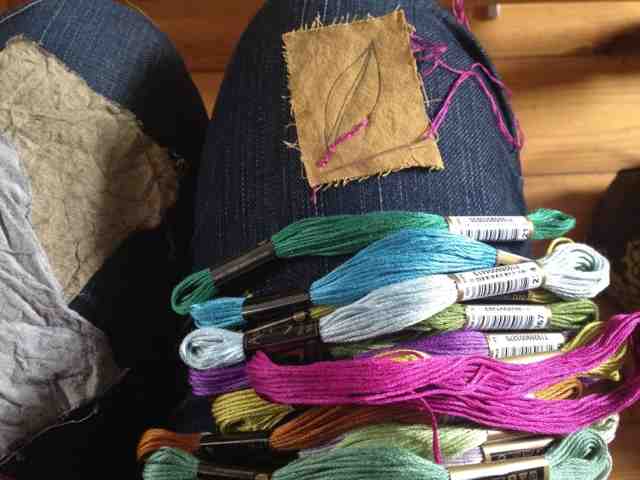 While at the natural dye workshop this past weekend with Kathleen, we dyed samples of wool skeins and cotton calico cloth. I had to ask what calico cloth was. Even though I was holding it in my hand, I had no idea and was confused as I had always understood it to be something else- a print. I learned that calico was simply the basic weave of a cloth. Cloth that was mor common before 1960?? I should look this up because I'm very curious now. While in the knitting shop today, I could not resist choosing a "few" colors to bring home to try on my dyed swatches. It really brought me back to when I would pay .25c for a skein of embroidery thread at the Grand City on Maine Street in Brunswick. I would spend summer days with a safety pin affixed to the knee of my pants of shorts and tie knot after knot forming rows of rainbows into a bracelet for one of my sisters or friends. Picking out the colors was especially fun and felt like such a luxury. 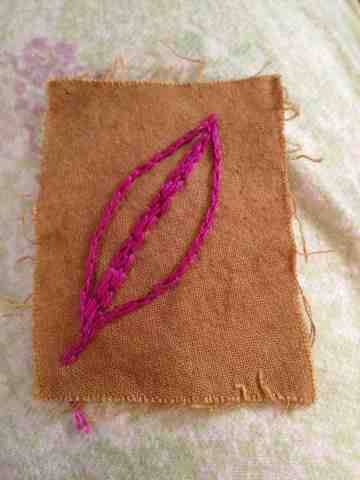 I have always been inspired by stitching, embroidery, tapestry, and anything to do with threads. It's so beautiful  to me and I will break for thrift shops just to dig around for a discarded piece of hand embroidered linen. It's only accorded to me recently that I needed to make my own. Using my own doodles and botanical themes, it feels awfully freeing to DO something that I've admired for so long like make my own embellishments on my clothes, and scraps of cloth here and there.
Posted by Rachel at 6:52 PM

I sure can relate to this post! Cant wait to see how your dyes progress.

I sure can relate to this post! Cant wait to see how your dyes progress.

We should talk about *all* of this (and more)! I never knew that putting yourself out there was sometimes a struggle for you--you fake it so well. <3