I noticed I've been a little absent from this space for several, several weeks.
With the start of summer, came many other activties
that have happily kept me from my computer.
But it has been too long.

I thought some of you might be interested in what I was up to last week
and what (a lot of the time) occupies so much space in my head!

For a few years I've been experimenting with lichen dyes.
I've found the more I research lichens the more I want to know.
And because I use lichens as dyes and have begun to teach lichen dyeing, I thought it a good idea to learn about the ecology of lichens so I could better understand this often misunderstood (they are not mosses) organizism. And then share that information.

In the natural dyeing community there can be very strong opinions that oppose the use of lichens for dyes. Sometimes these opinon stem from a place which is often taken out of context because of looking at the situation from one angle only AND not really understanding how lichens work.

Lichens, to me, is such a special item to use for dyes and I use the utmost care and respect when collecting, and dyeing.

If you'd like to share any of your thoughts or questions regarding lichen dyeing here, please do so. I really enjoy conversing about the subject.

But for now I'm just going to share some snippets of this very unqiue week I had.

This week long seminar was not based at all or linked to textiles but solely on the ecology of this organizism.

It was probably one of the most intense weeks of my life.
Or at least in a long time.
The amount of information, words, and terms thrown at us
had our heads exploding for at least the first few days. 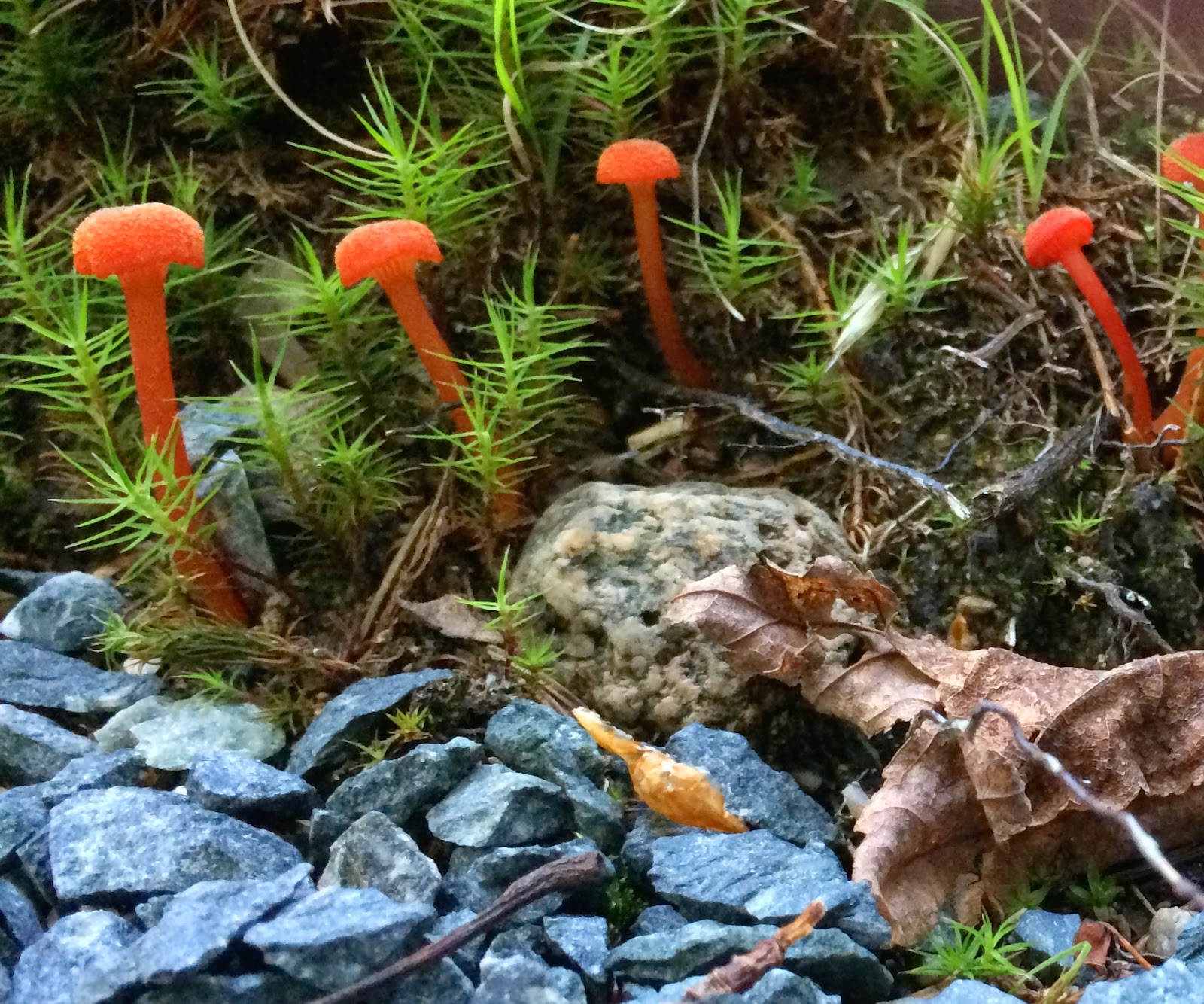 {teeny tiny mushrooms outside my cabin. I checked on them every day and even looked at one under the mircoscope. Just so beautiful! I tried a spore print which I know came out lemony yellow but also the teeny tiny mushroom shriveled into a dissapearing red speck.}

I still remember the first thought I had when I stepped out of the car once I arrived:
** WOW! The air smells just like a balsam pillow! ** 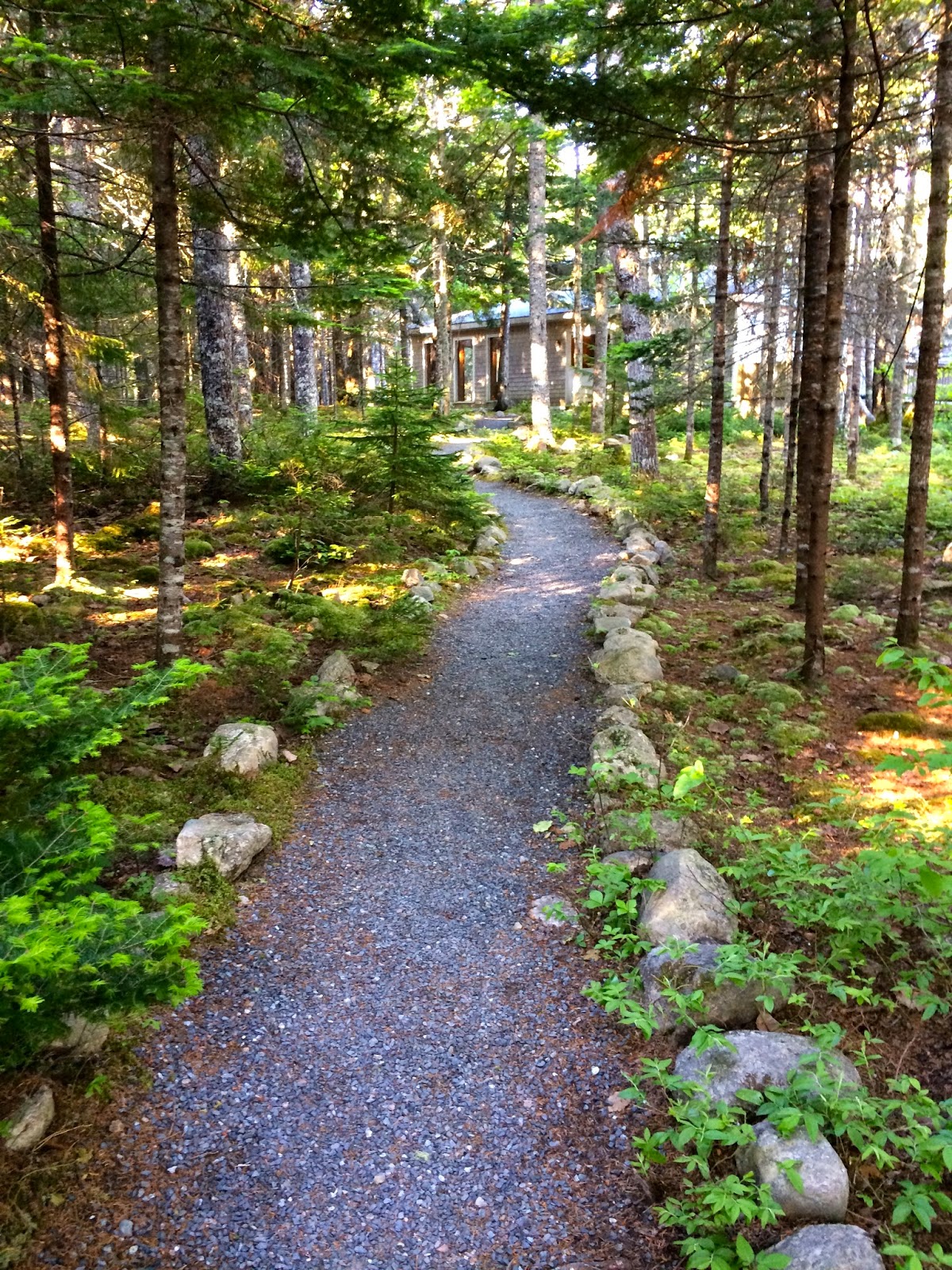 {path to the dinning hall.}

Being at a slightly higher altitude than here on Peaks Island
and a just a different air quality. I thought the air here on Peaks was pretty amazing.
But up there at Eagle Hill,
it's also pretty special.

On our first walk, I was introduced to the reindeer lichens.
The Cladonias

All sorts of Cladonias where around in cripsy dried puffs coming up from the ground and living
with mosses.
Driving home I had this faint memory pop back up of when I was young. In the late summer, our  family had this berry picking tradition of driving from Bowdoinham to Dresden (or Richmond, I don't remember) to pick blueberries down this dirt path that didn't seem to lead anyway except blueberries
and these strange crispy puffs that I always felt bad about stepping on. 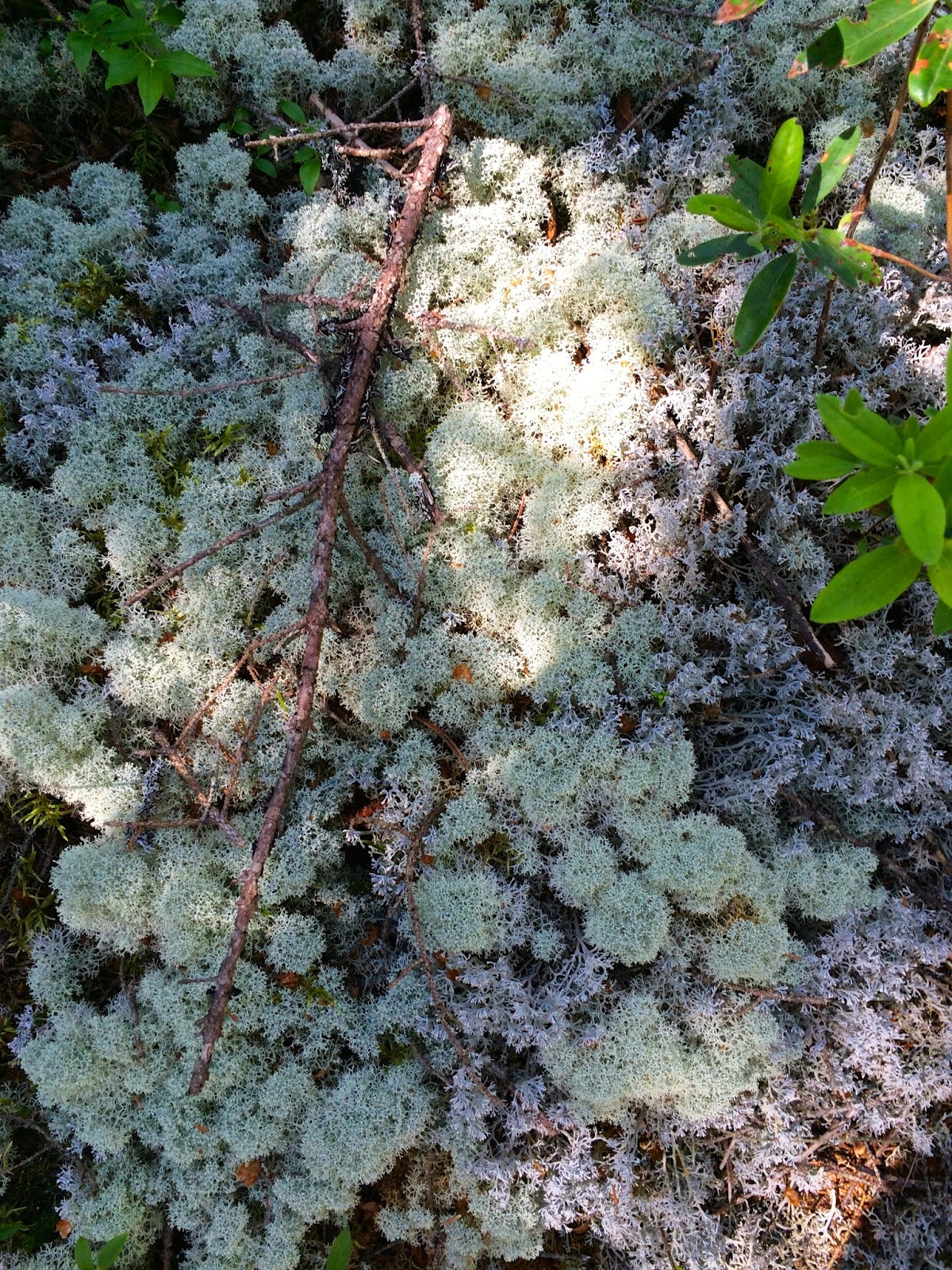 I know I've seen these here or there but not really in the multitude I did this week. 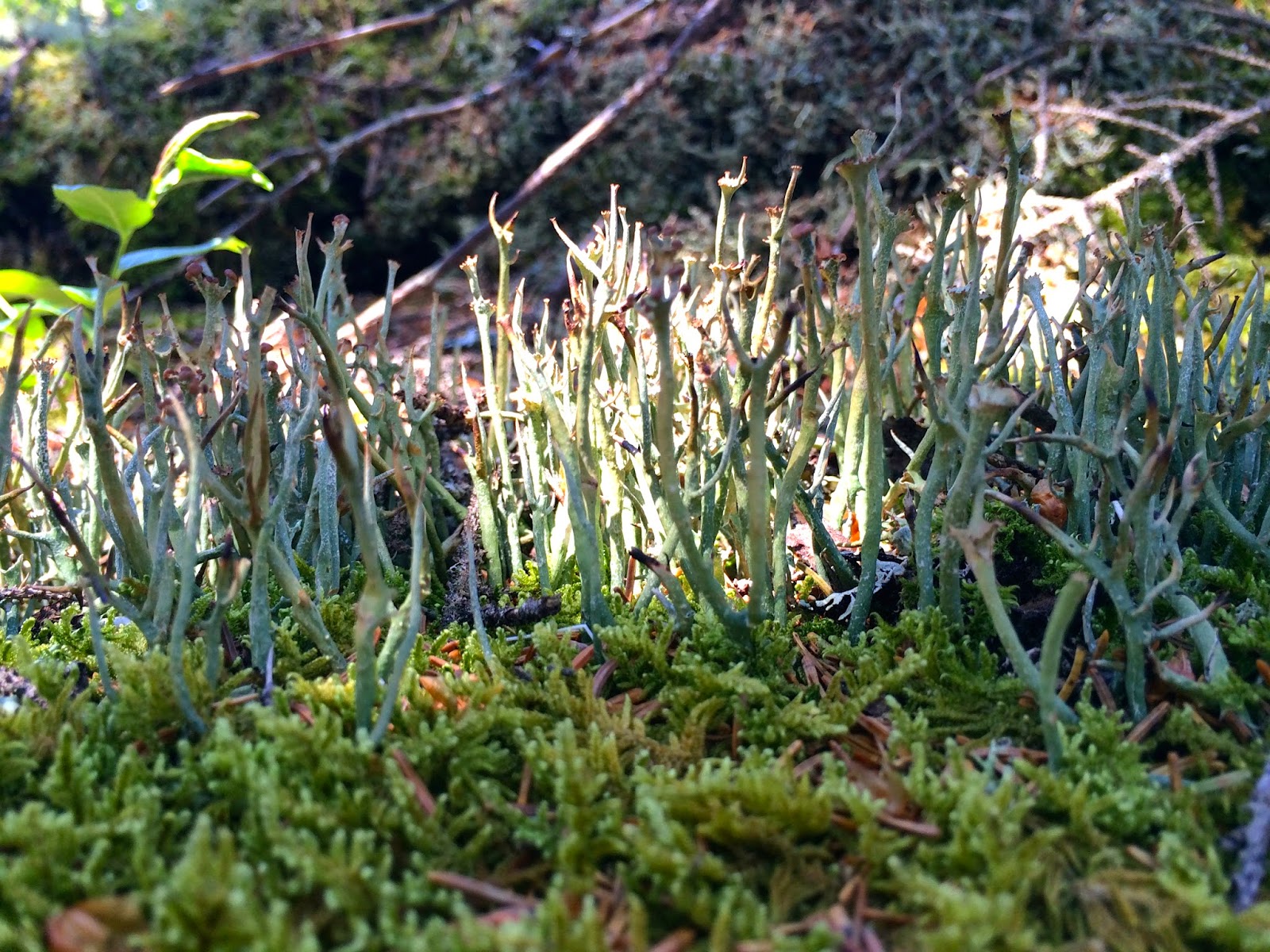 This lichen, Usnea, was hanging in long whispy threads, wrapping around the trees. 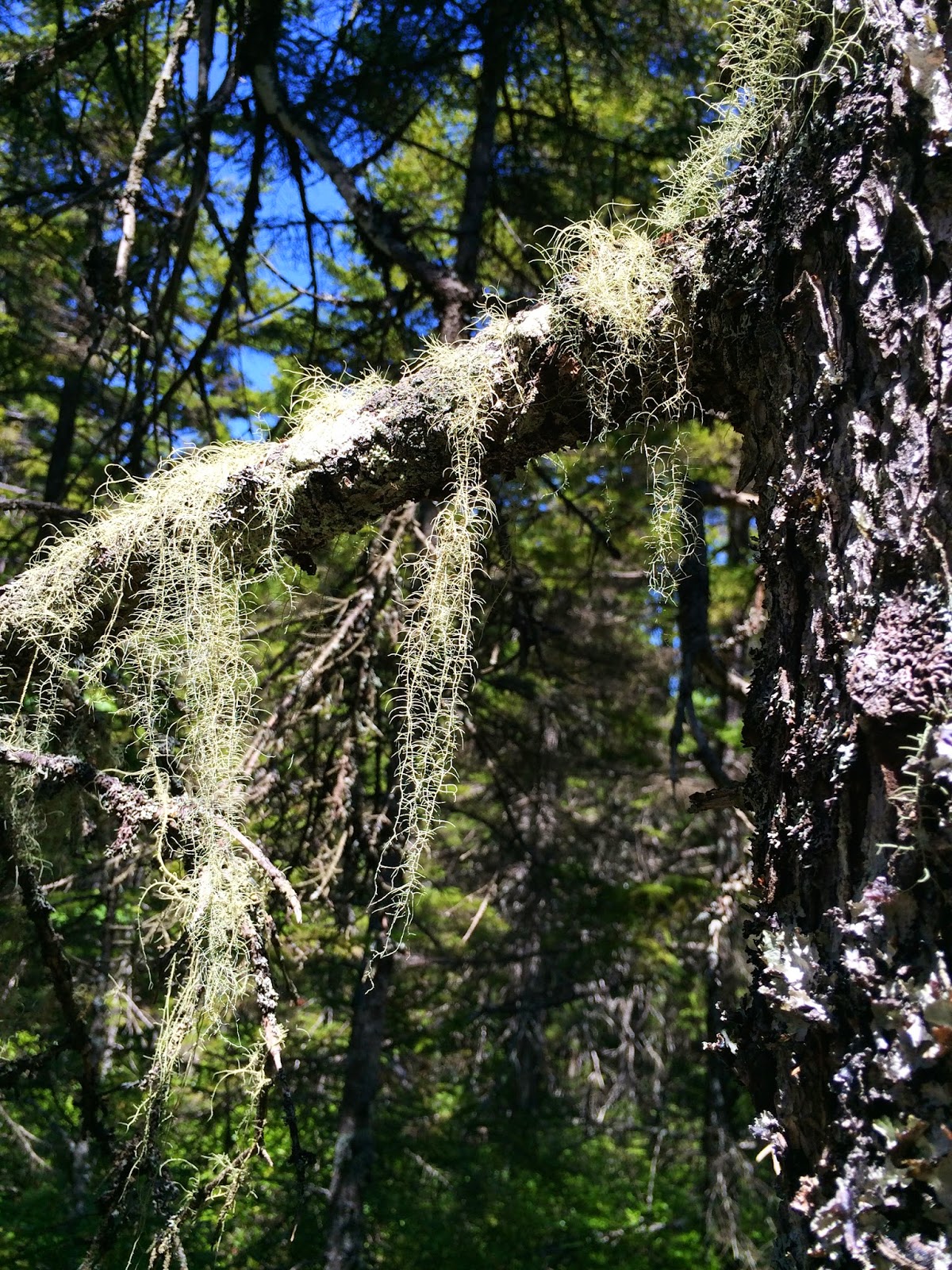 Lobaria, for me, is one of the star lichens.
It's large and leafy and just so stunning after a rain.
It changes from a dry brown green to this almost glowing green when wet. 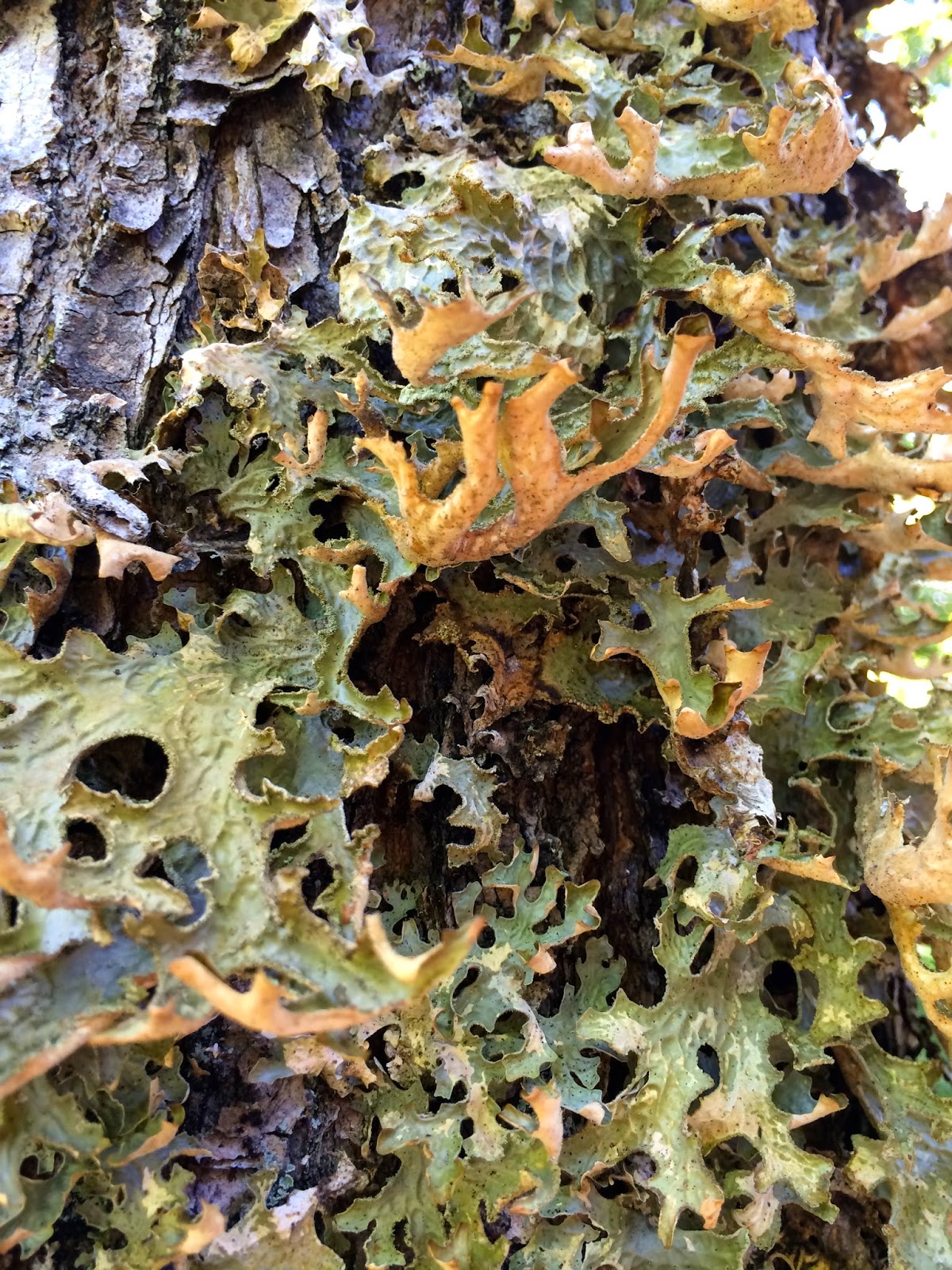 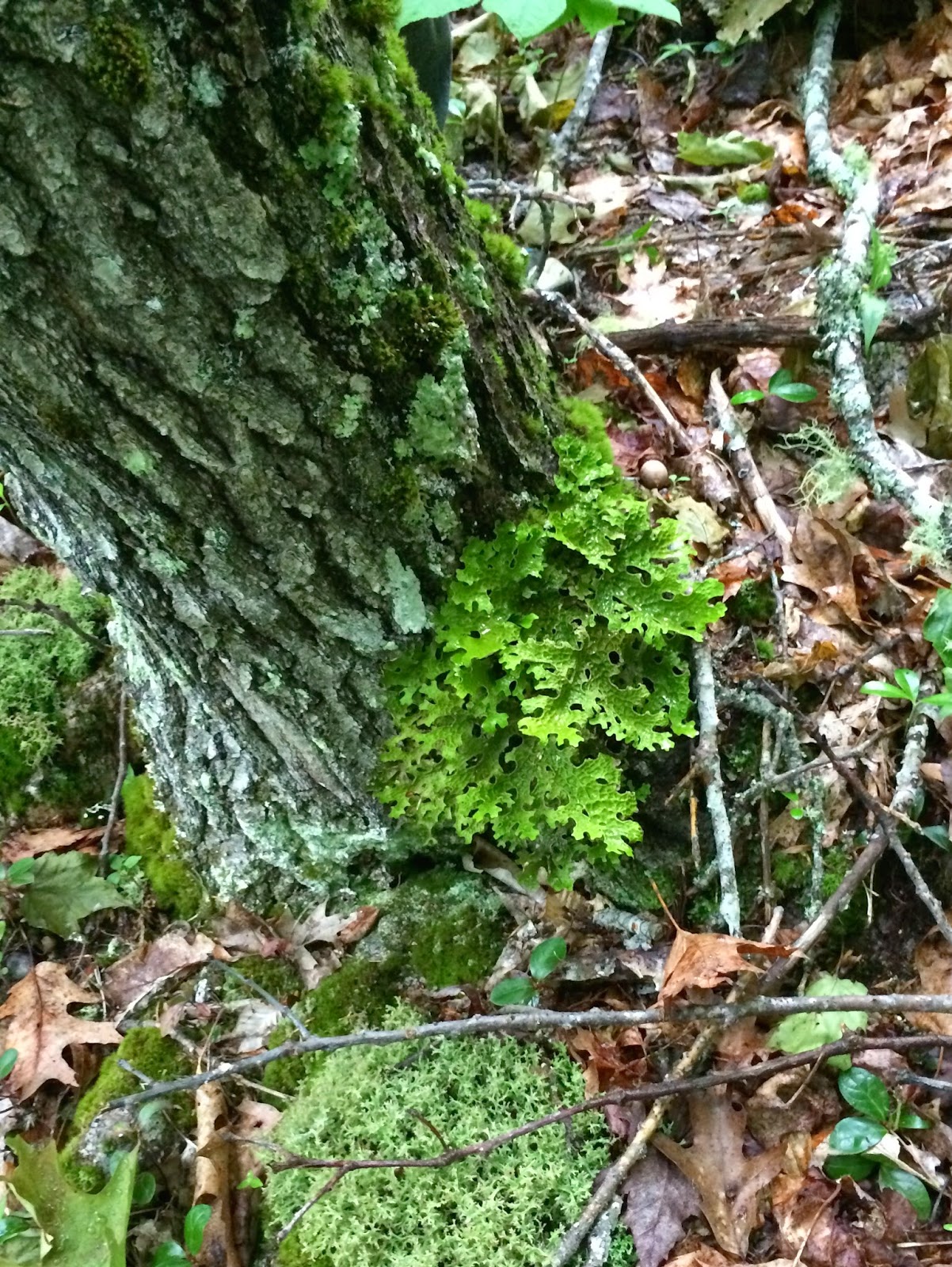 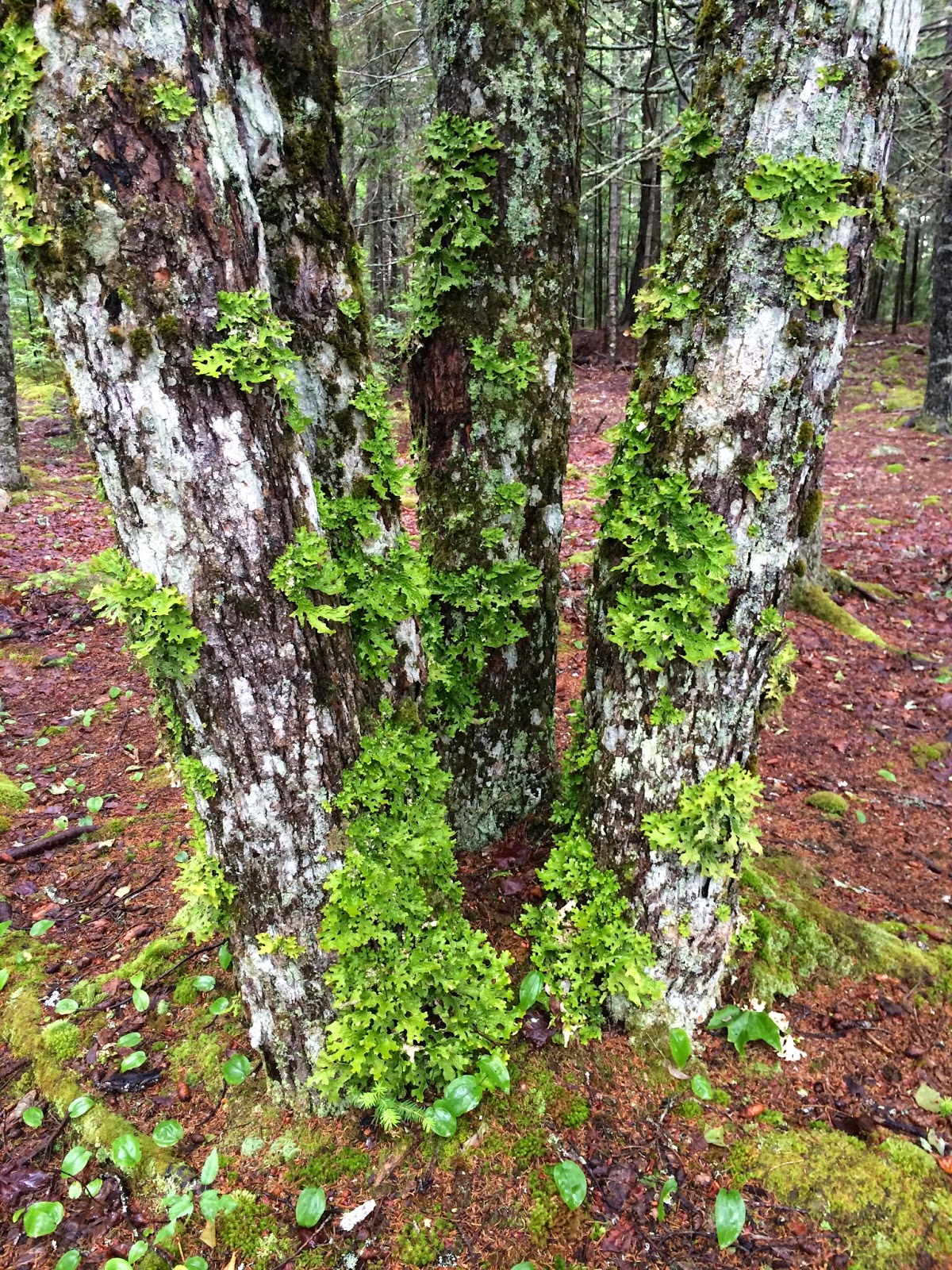 When we weren't out for a walk collecting specimens,
we were working in the lab.

My favorite part about being in the lab was the chemical testing.
To look at lichens under a microscope is now one of my favorite past times.
But to add a drop of a certain chemical to see if that speck on the inner part of the lichen will change color, that was my favorite thing about the lab work.
SO much so, that with each lichen I found, that was the first part I did. Just so I would know what it's potential dye capibiities would be. Also for when I hit that spot in the key work, I would know and could move on instead of stopping the key work to do the chemical test.

On the first day, we learned how to prepare mini pepets (is this a real word? anyone?)
It's basicly a long thin hallow glass tube that you melt over a flame just long enough for the middle to melt, pull apart and snap in two.
You then have two effective tools for drawing up just the tinniest bit of liquid to apply to your lichen where you've also shaved a bit away to expose the inner white medulla (the inner meat). 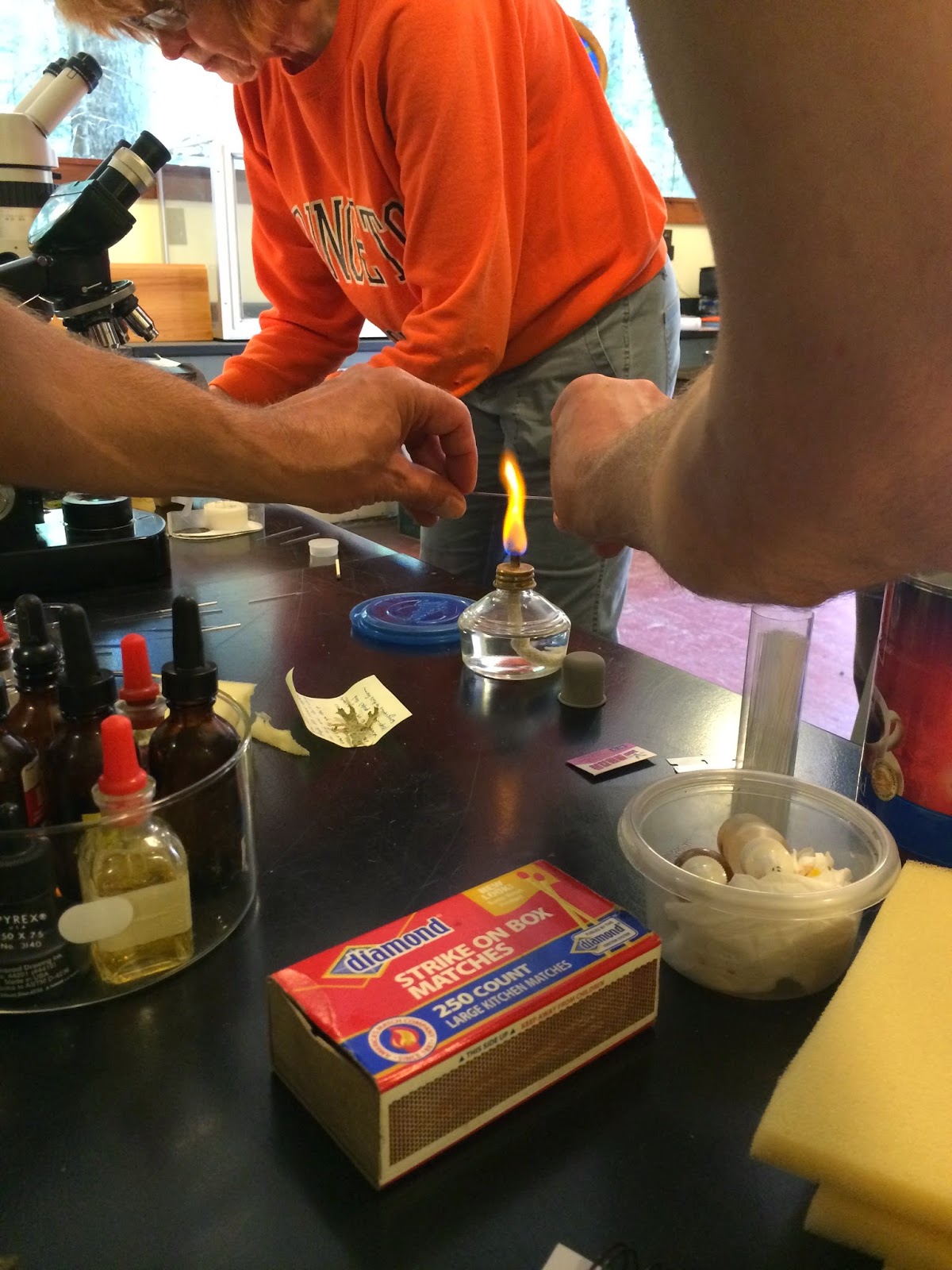 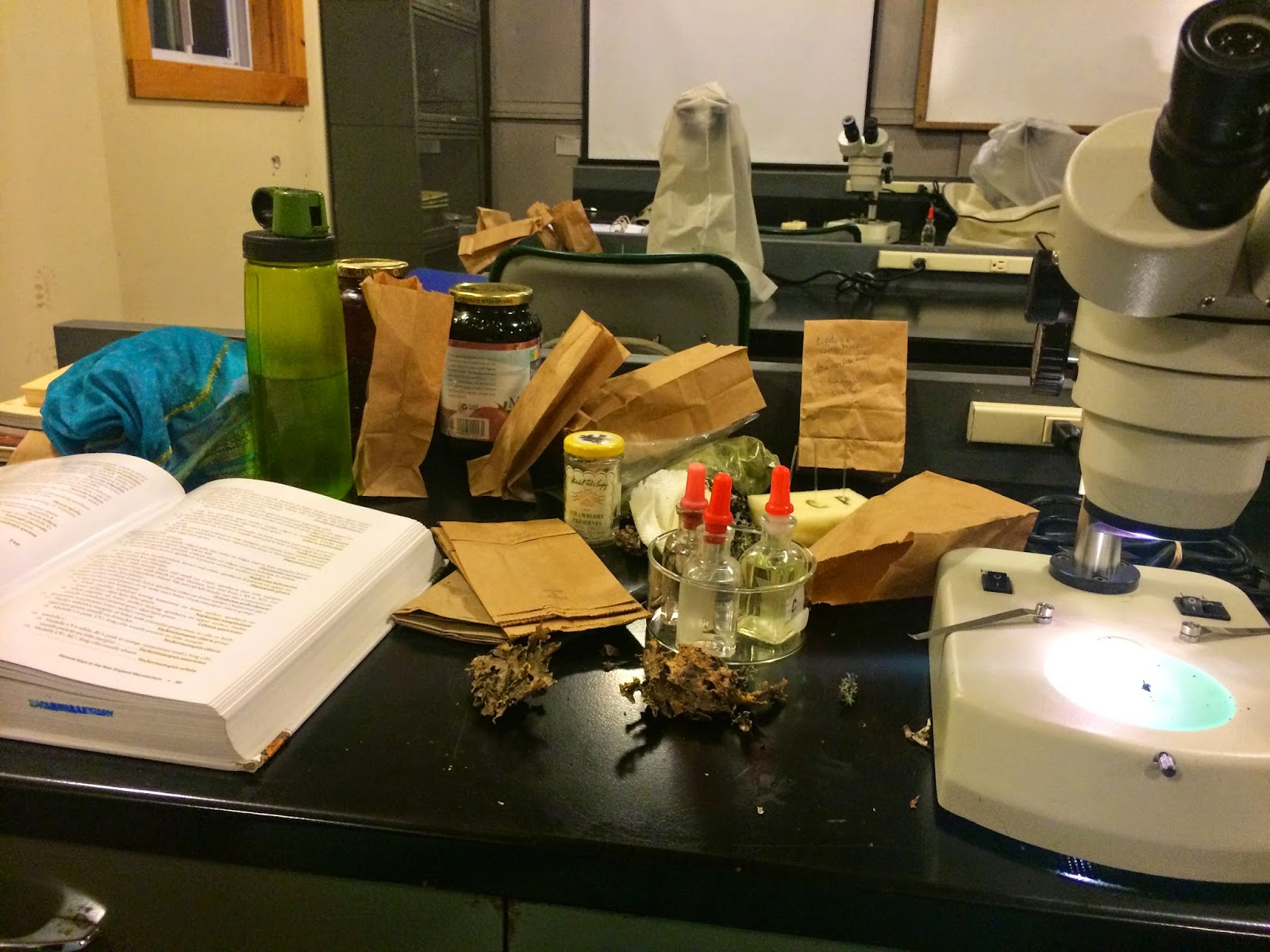 I really can't remember what this lichen on the tree was but I know I snapped the picture because
I got excited that it changed to red/ orange with Chlorine.
From what I learned about the lichen groups, because you can't easily pick this lichen up, I want to say it's a crustose lichen. 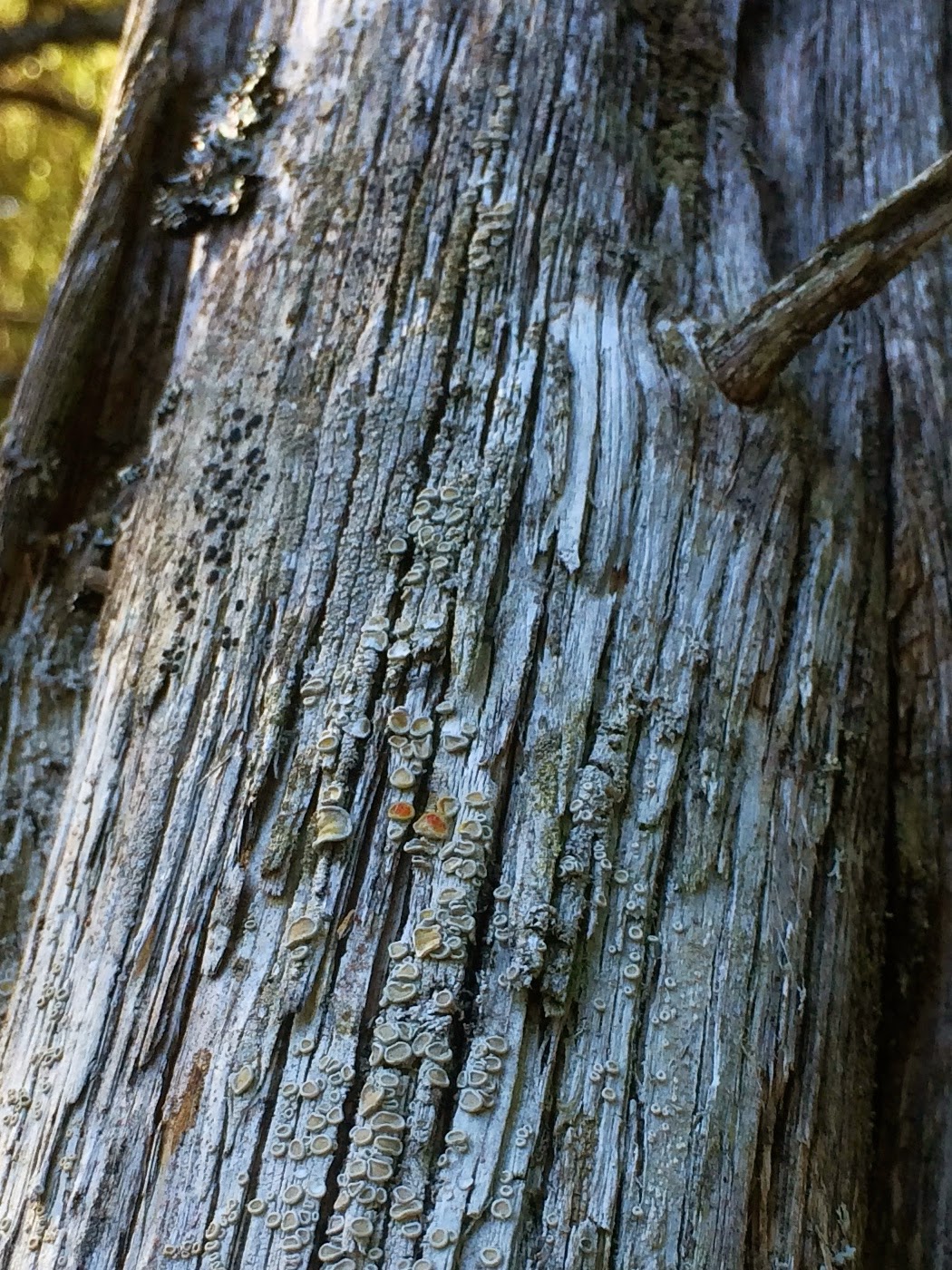 We discovered this lichen on our first walk on the blue trail at Eagle Hill. Or maybe our second walk...
In any case I remember it being said it was Ghost Antler Lichen; Pseudevernia cladonia... but now I'm wondering was this only mentioned in conversation when we were looking at this lichen or was this indeed the case? With so much knowledge flying every which way between at least 2 experts, it was difficult to keep everything straight much less record!
I know we didn't collect any of it because of the surprise of seeing it here. 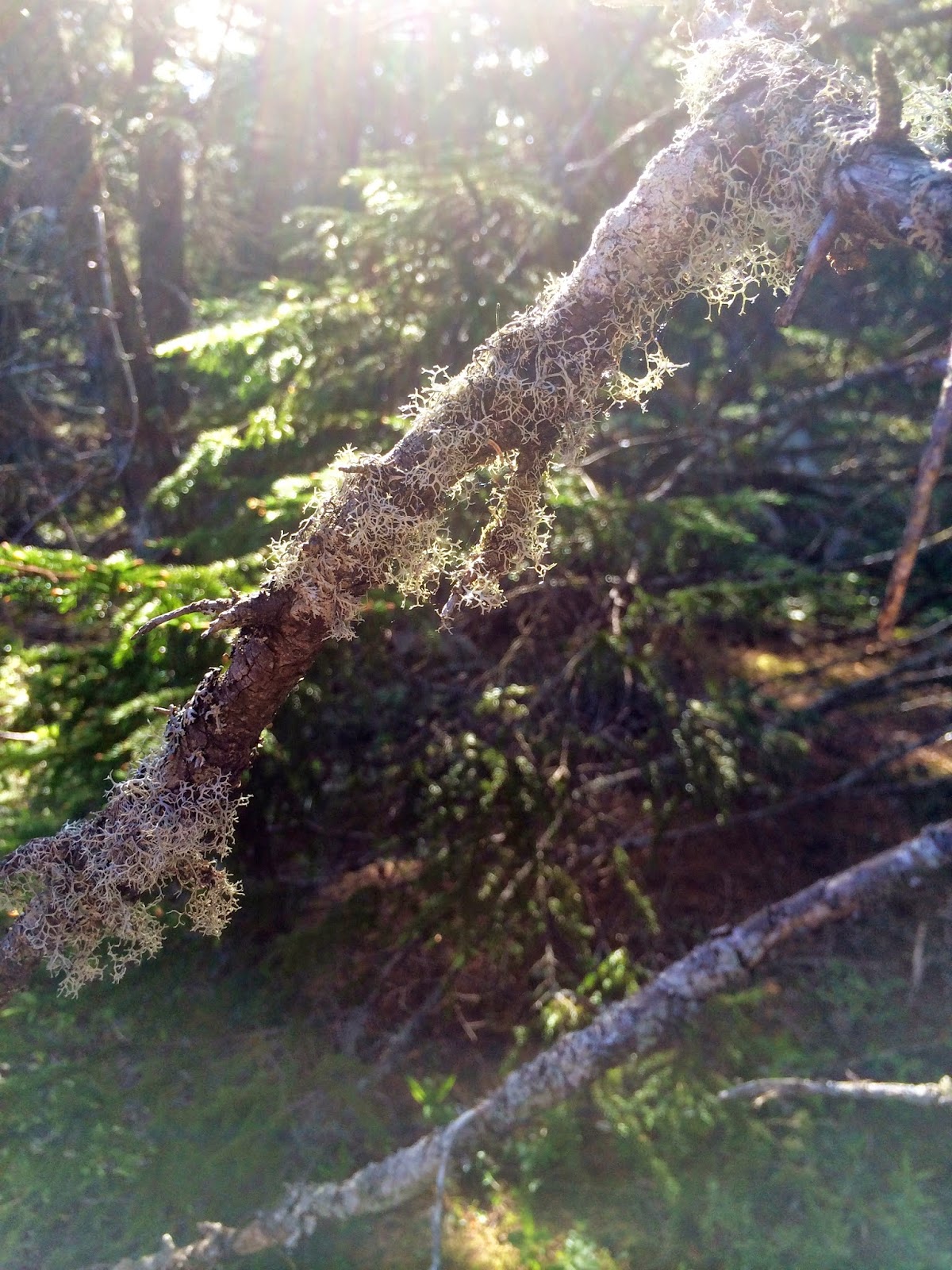 We took a trip to Pine Hill Preserve on Little Deer Isle.
It was a wondeful little area to walk around. We hiked up and around this mond of rock to the right. Came down the back, and wandered out to the left. 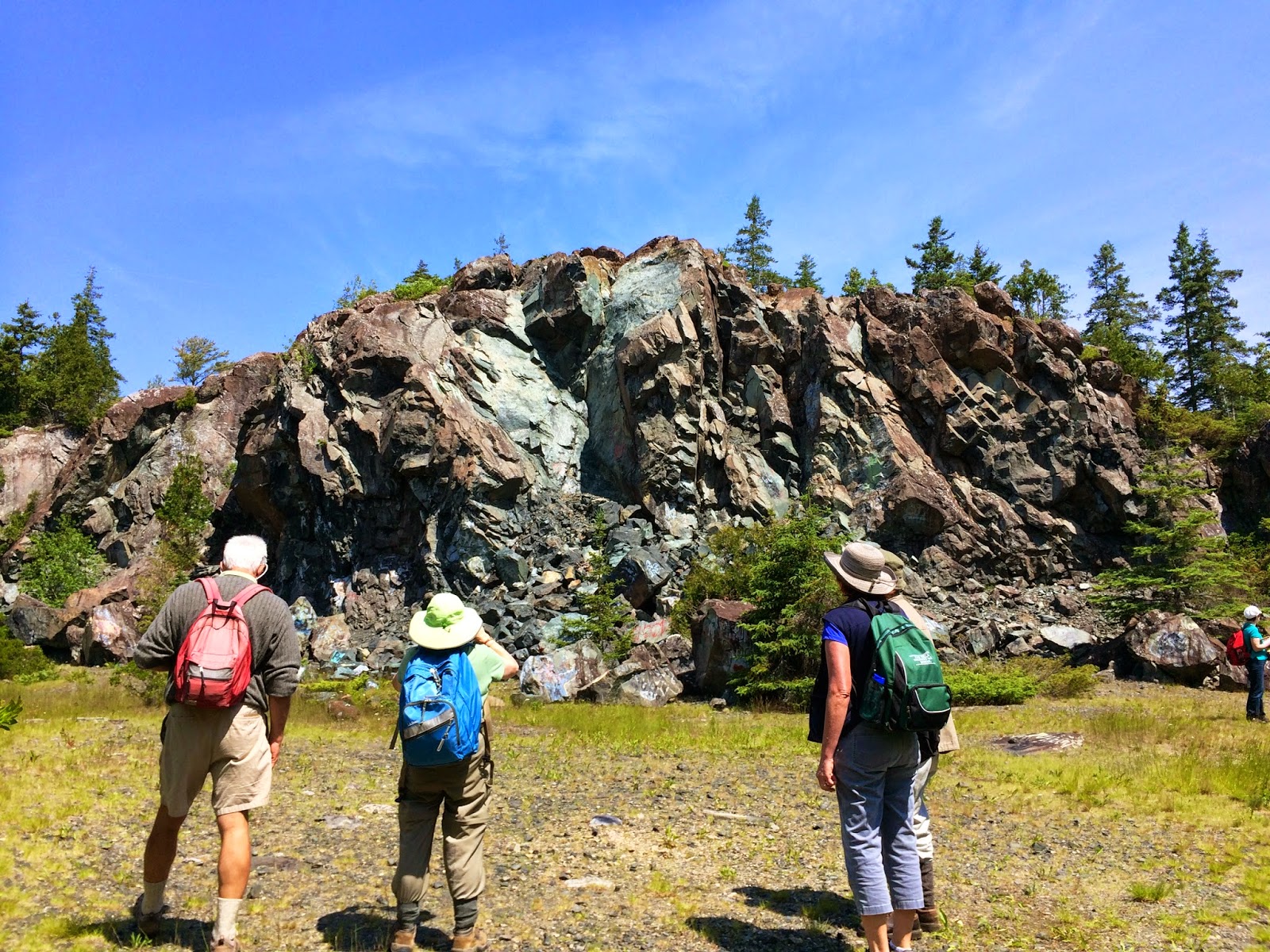 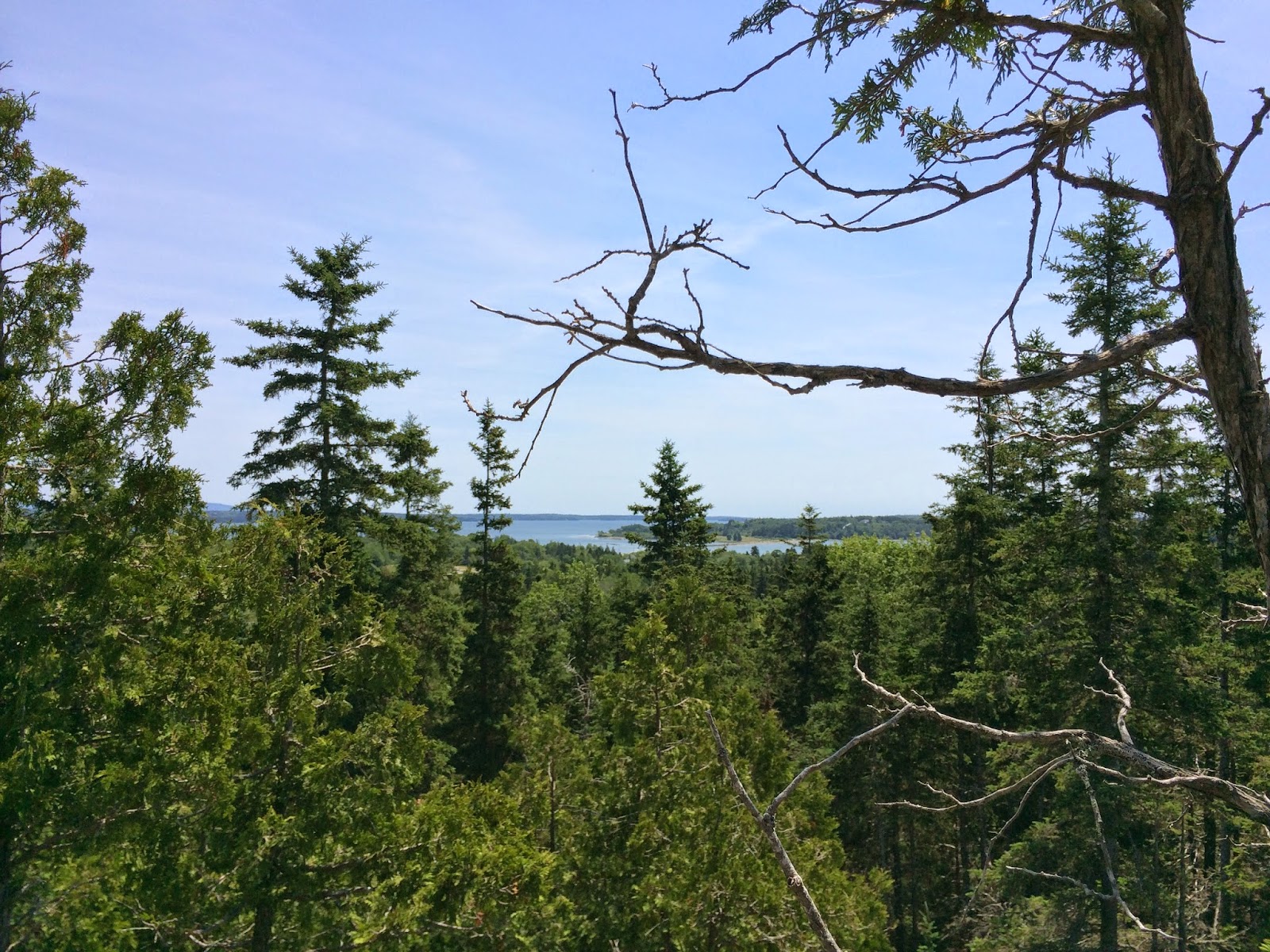 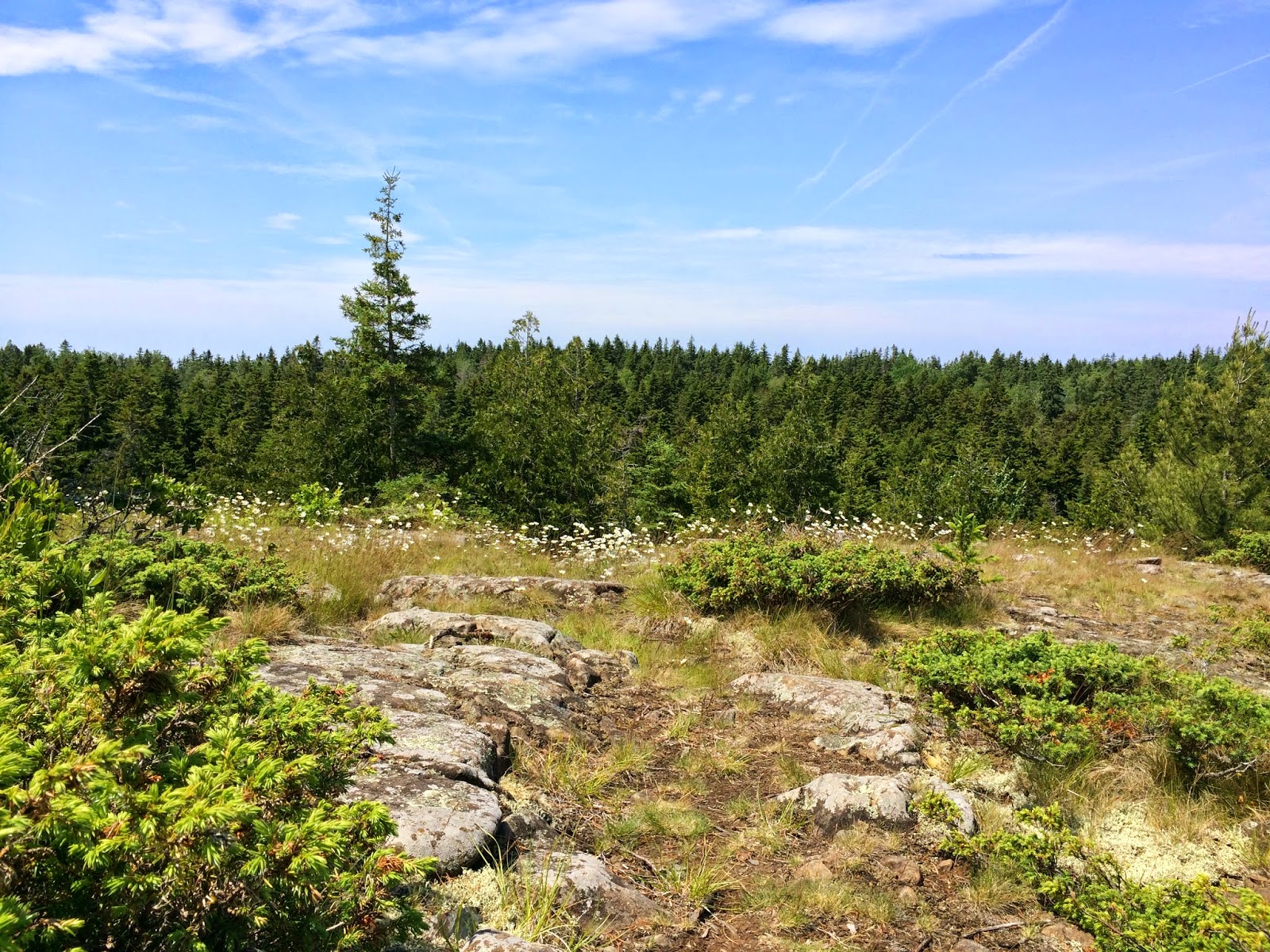 {atop pine hill and spotting a group of daisies} 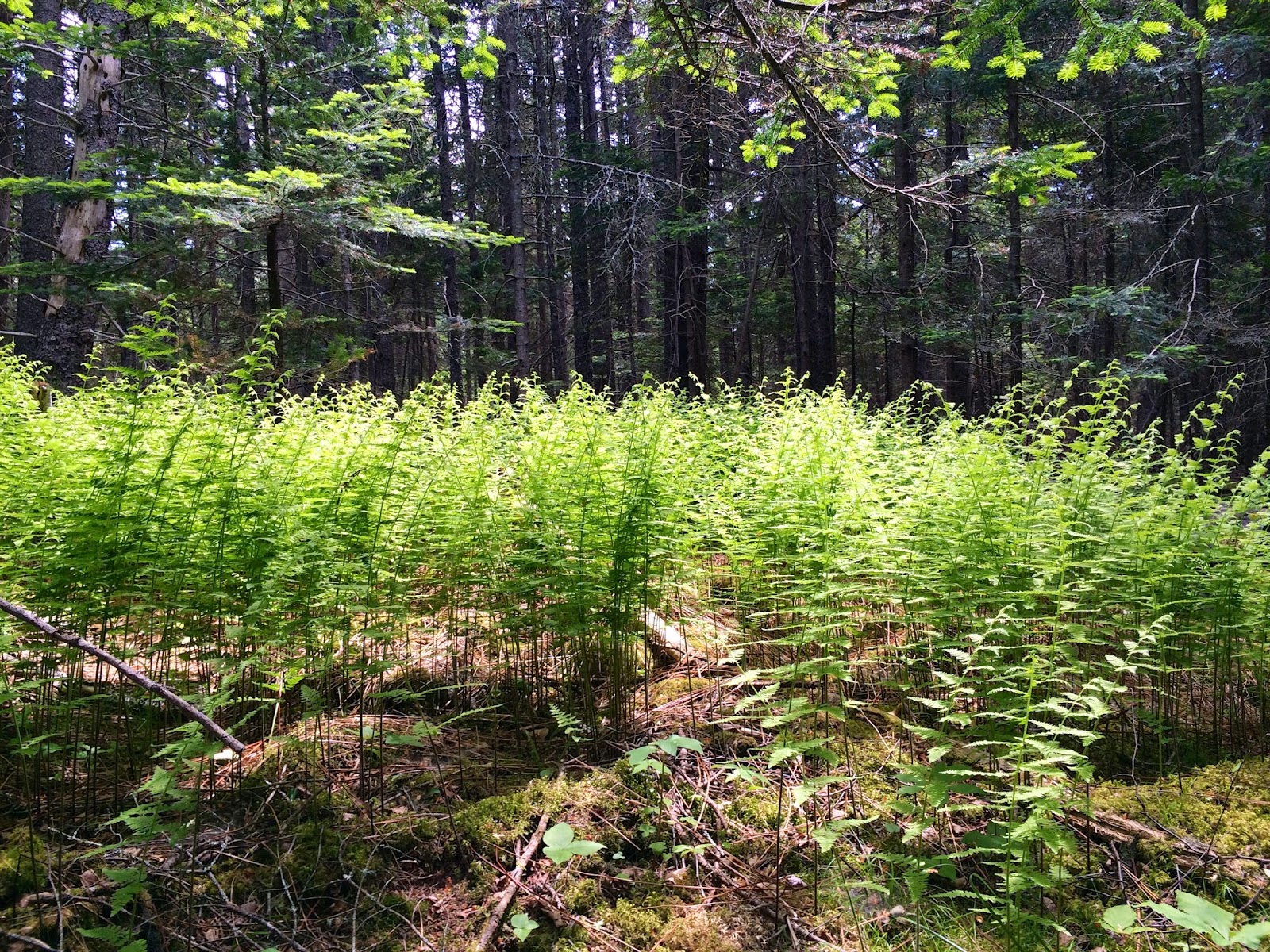 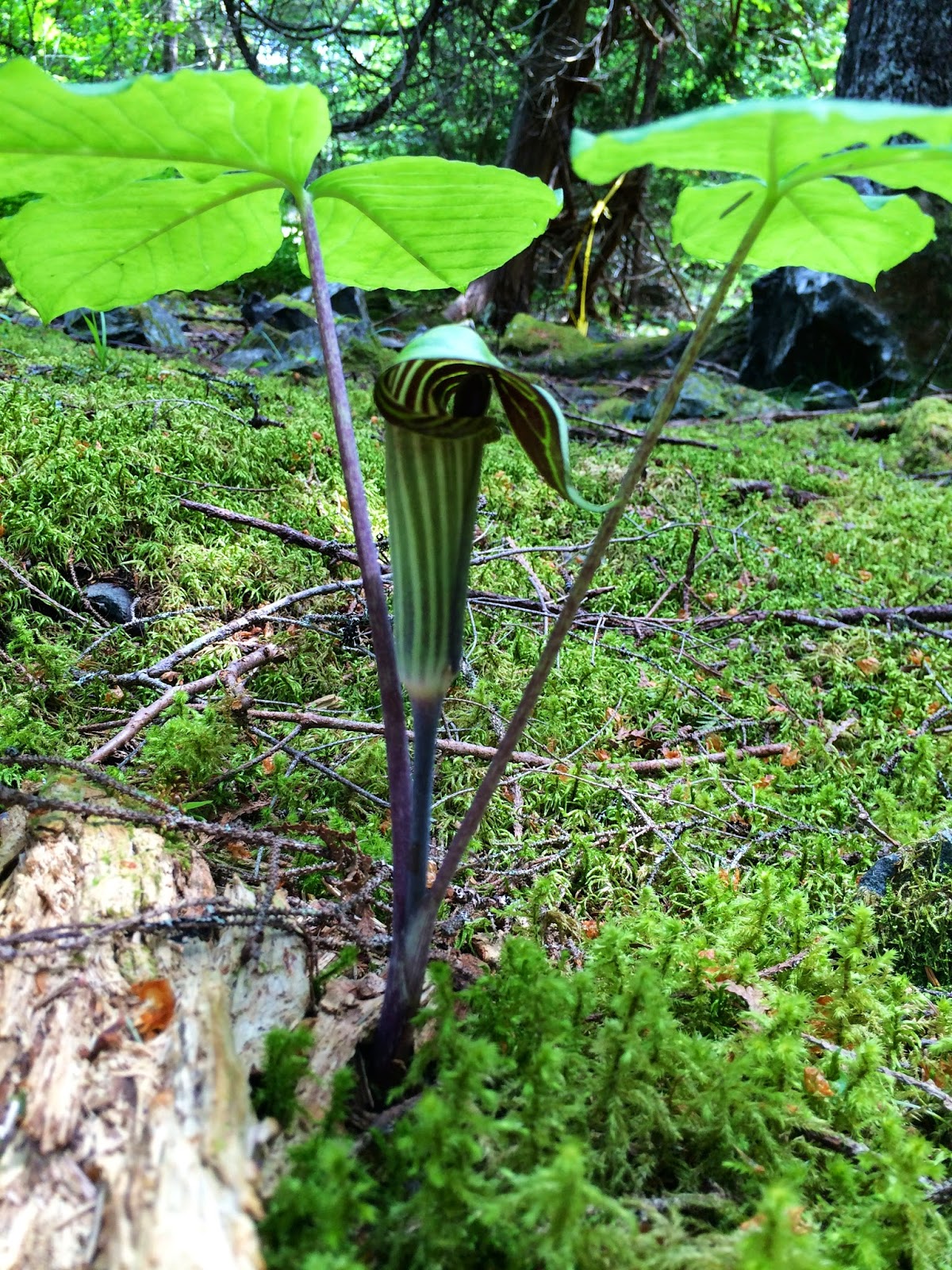 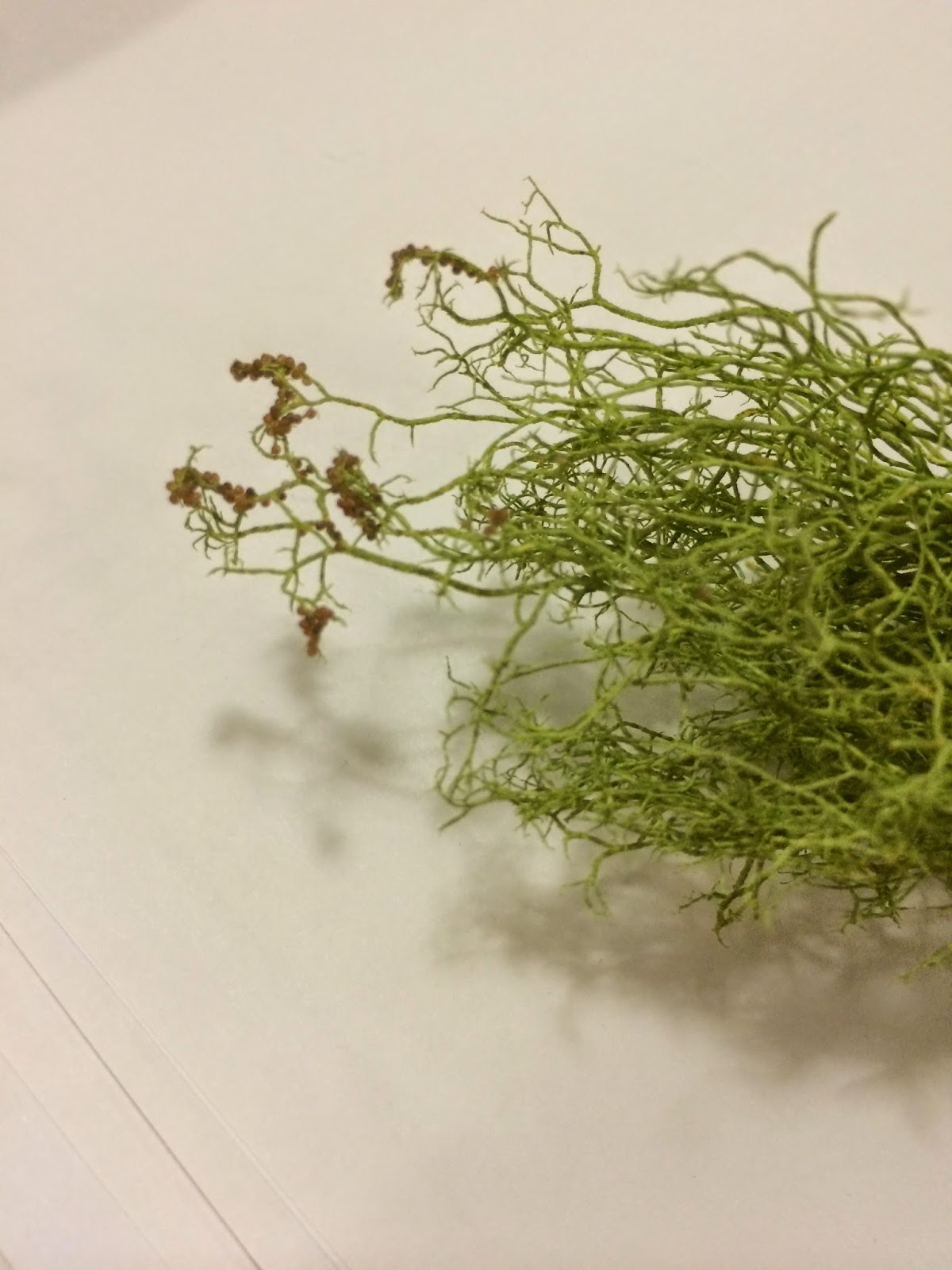 {insect eggs on usnea}
We looked at these under the microscope it was a wonderful sight.
Iridescence globes with carved lines going from one axis to the opposite.
Like a Christmas ornament.

On another field trip we stopped off on the side of Tunk Road where our instructors knew of
a particular dye lichen.
Umbilicaria
One of my favorites to work with.
Collecting just a small handfull of these rubbery if wet and crispy when dry lichens have SO MUCH
dye pigment inside.
My ears perked up when our instructors mentioned there would be umbilicaria up this steep embankment.
But what I saw when I looked up almost made me pass out from excitement.
Rocks and rocks and rocks covered in Umbilicaria mammulata.
BIG.AS.FRYING.PANS.
Everything that I collected which was more than 20 large pieces bigger than my hand I found on the ground already detatched from their substrate.
It was a jack pot kind of day indeed. 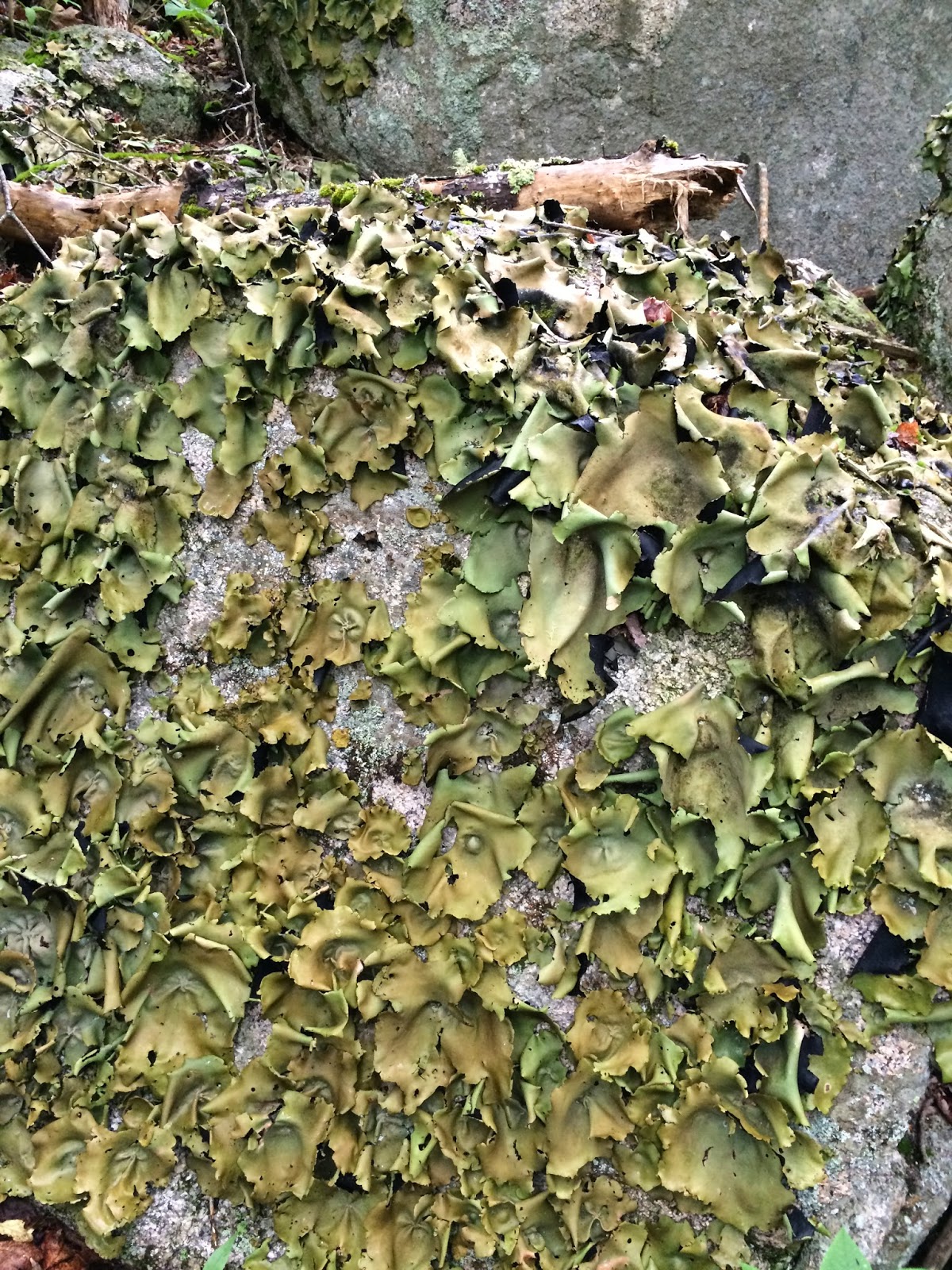 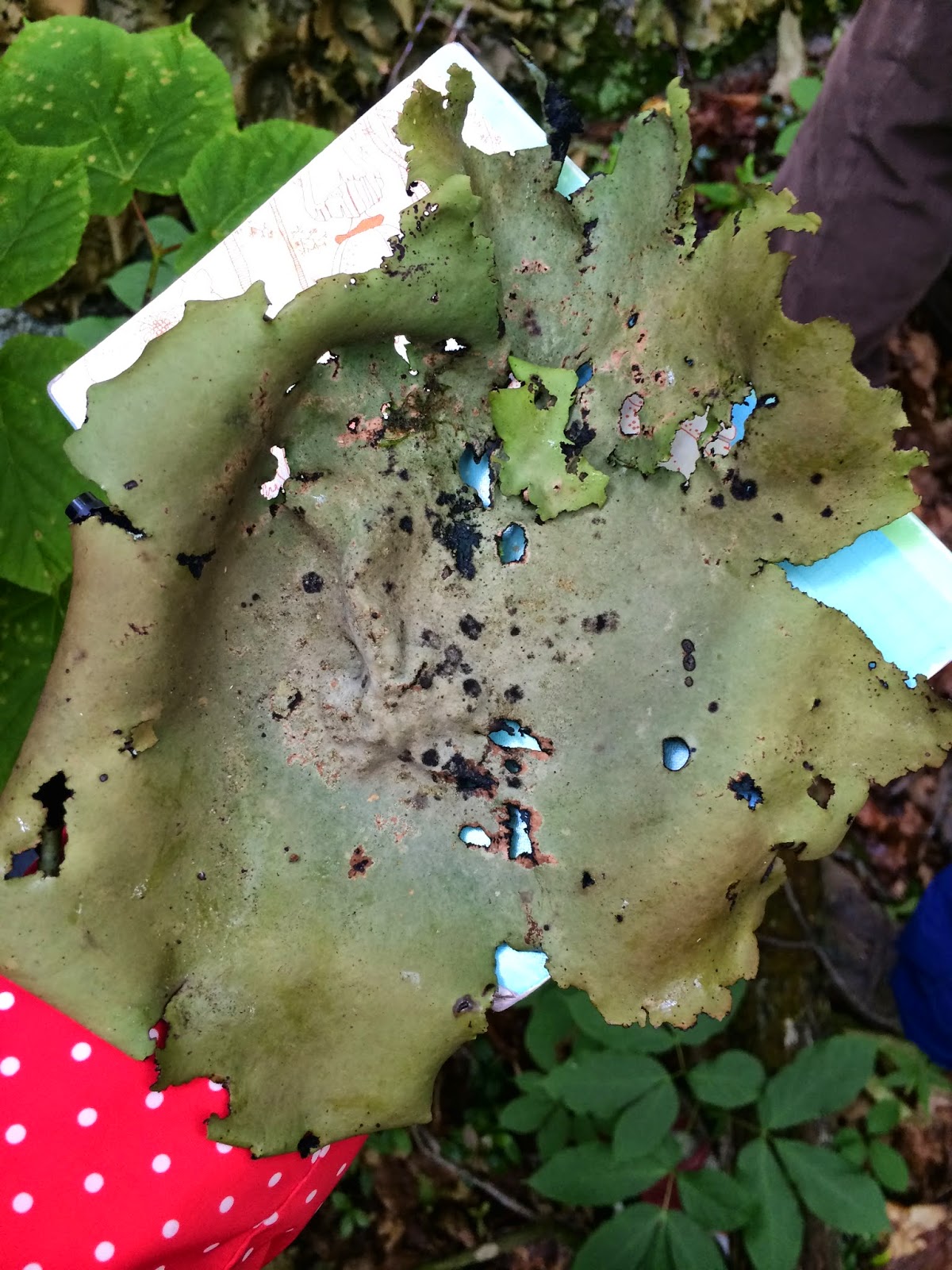 On our last full day we took a field trip to a beautiful spot which now the name escapes me!
It was a lovely walk through one of the nicest trails I've been on. The drive to and from had spectacular views, not unlike spots I saw driving the west coast of Ireland with the tiny inlets and sweeping peeks of ocean.
It was exactly this time last year that we were getting ready to come home from Ireland.
So that could have been why it was on the brain too. 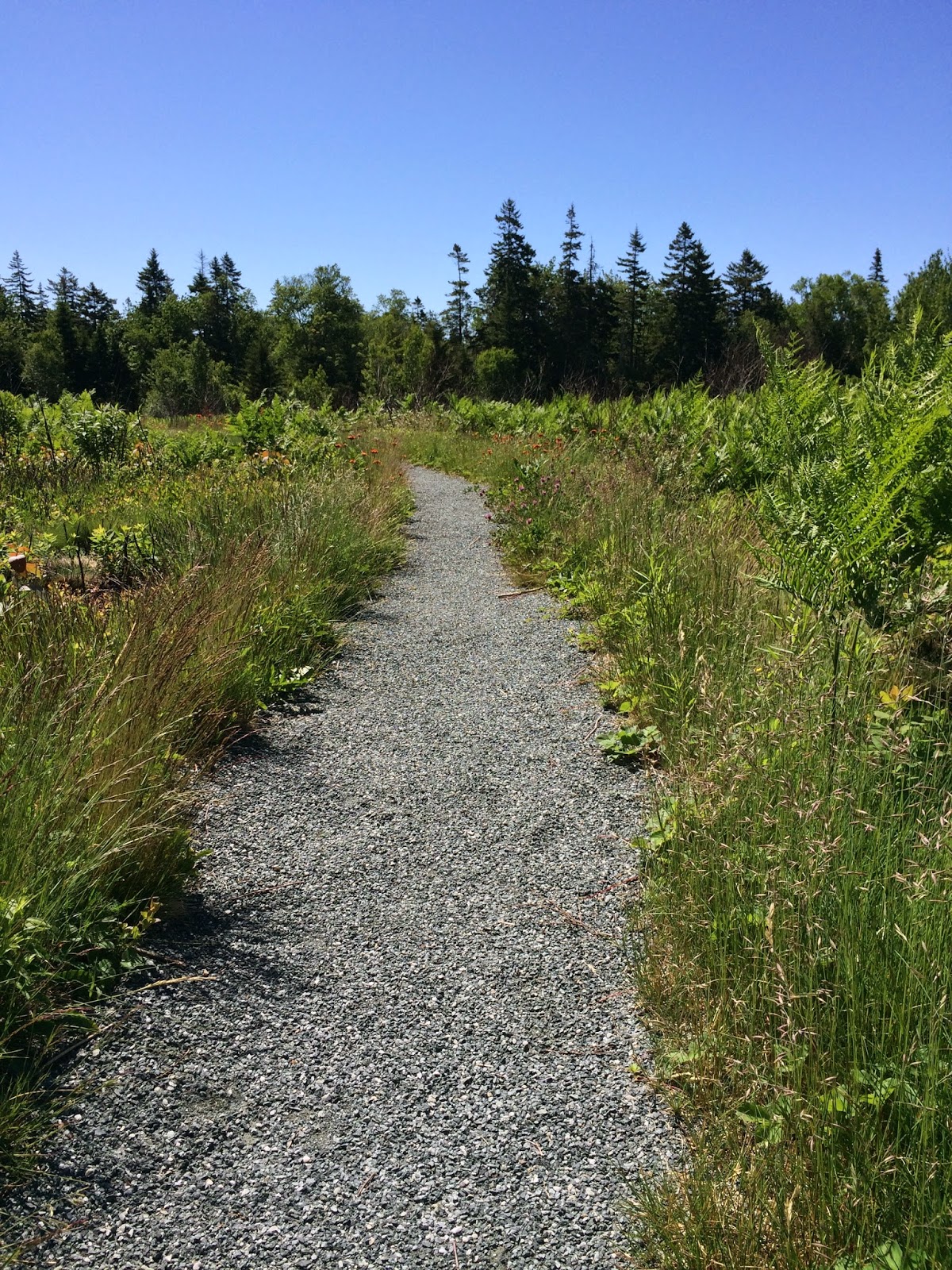 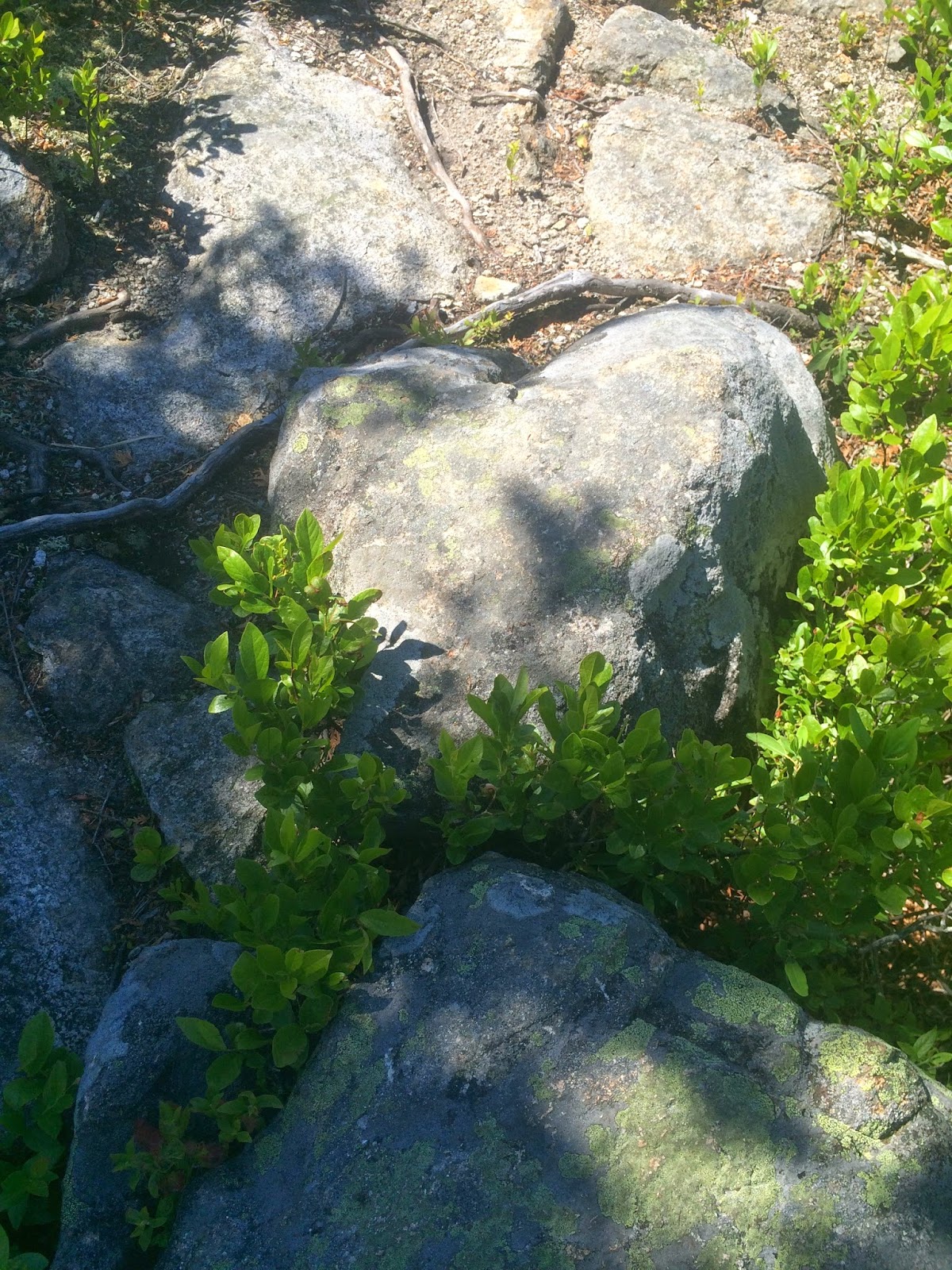 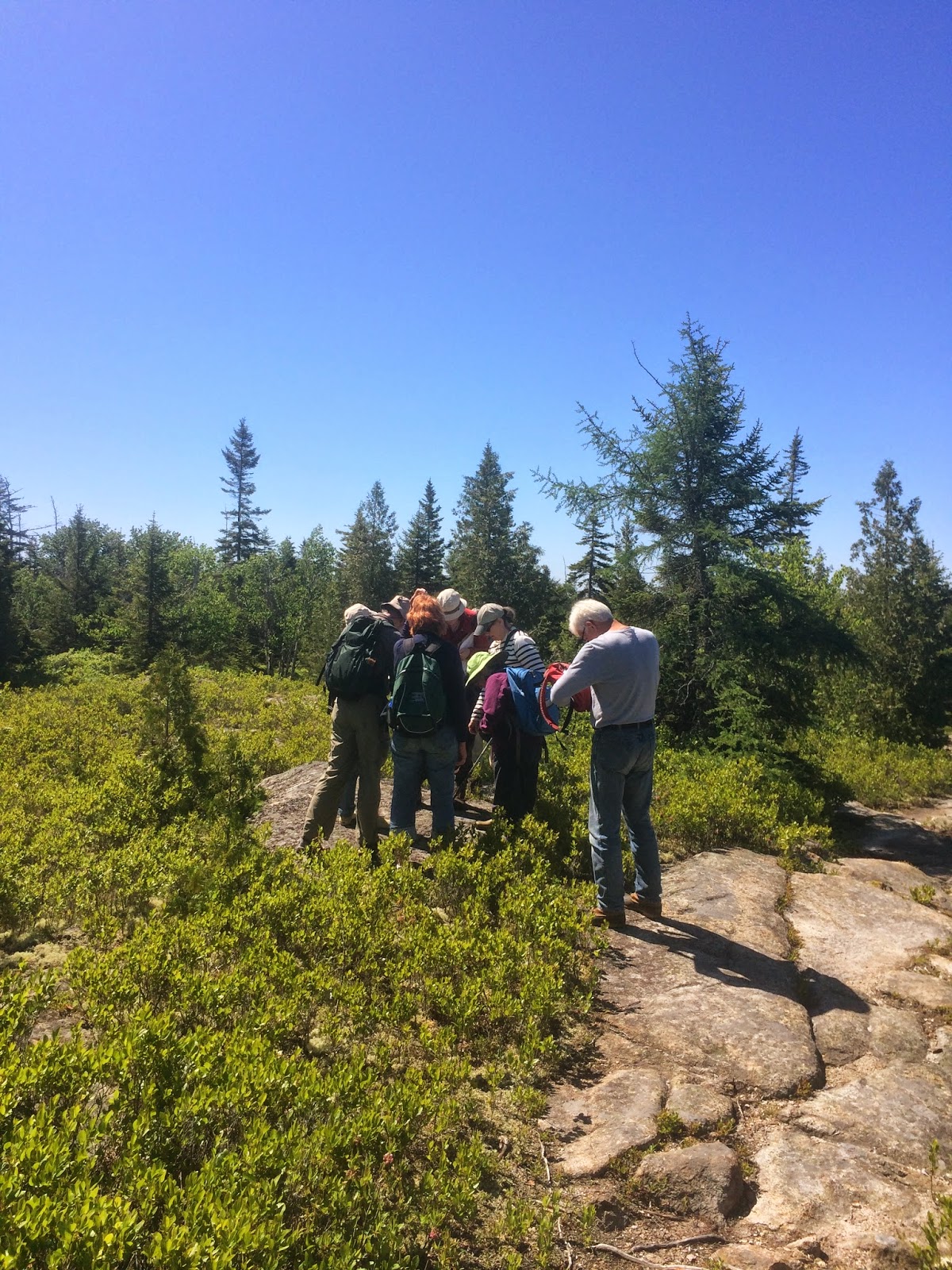 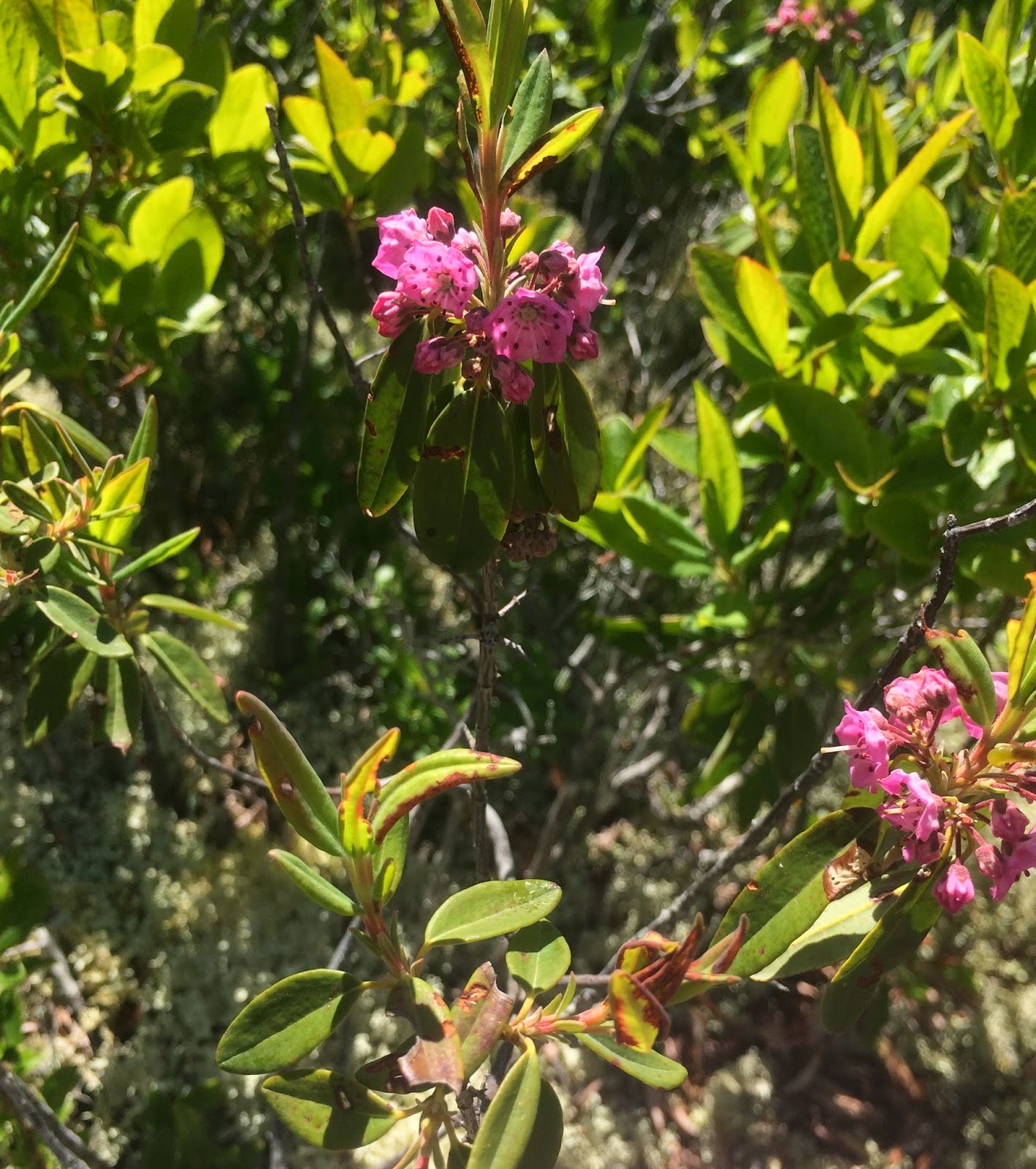 {can anyone tell me what blossom this is?} 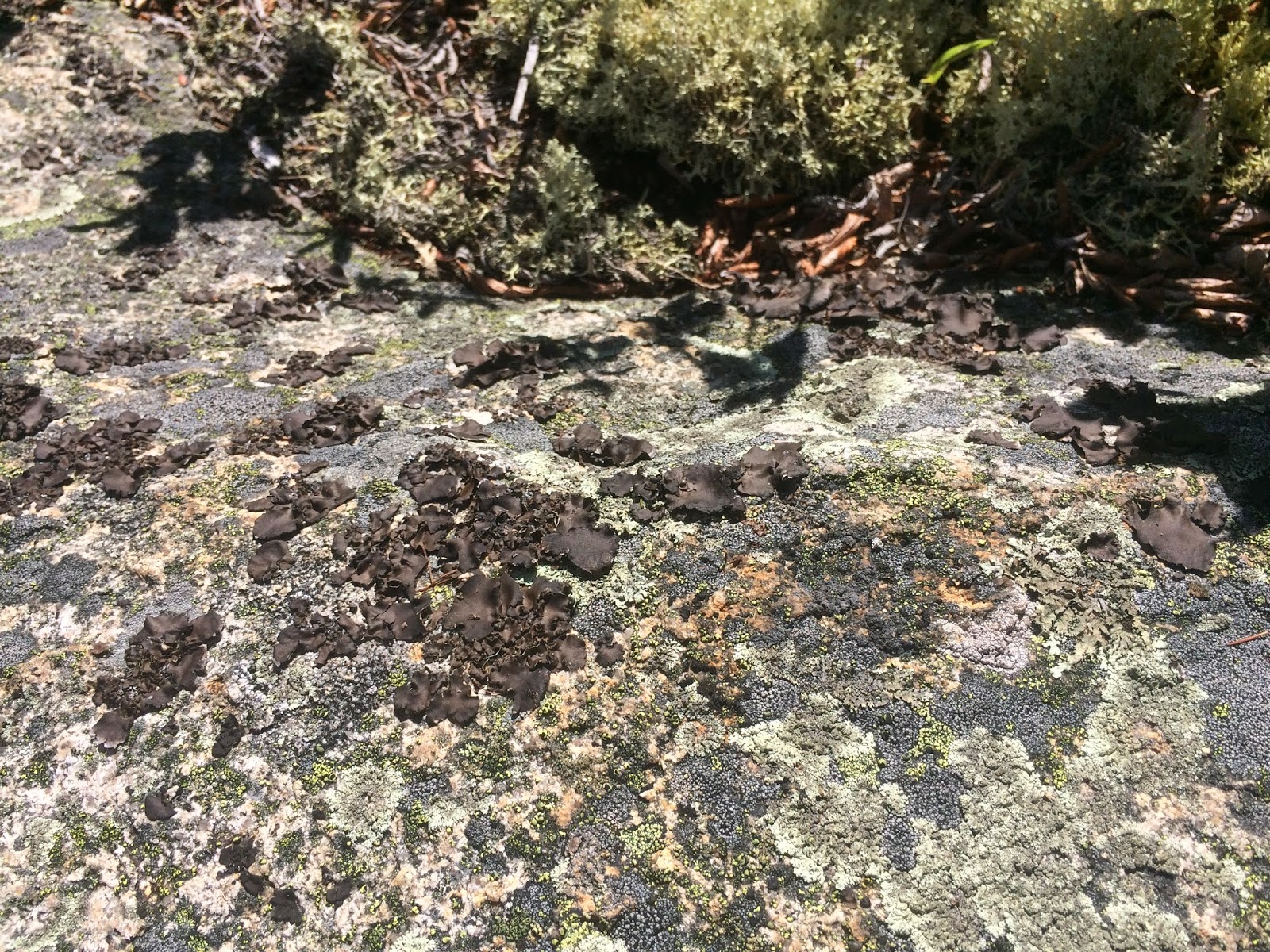 {more umbilicaria but of a different species. not mammulata. I think I collected some and will add the species here later.} 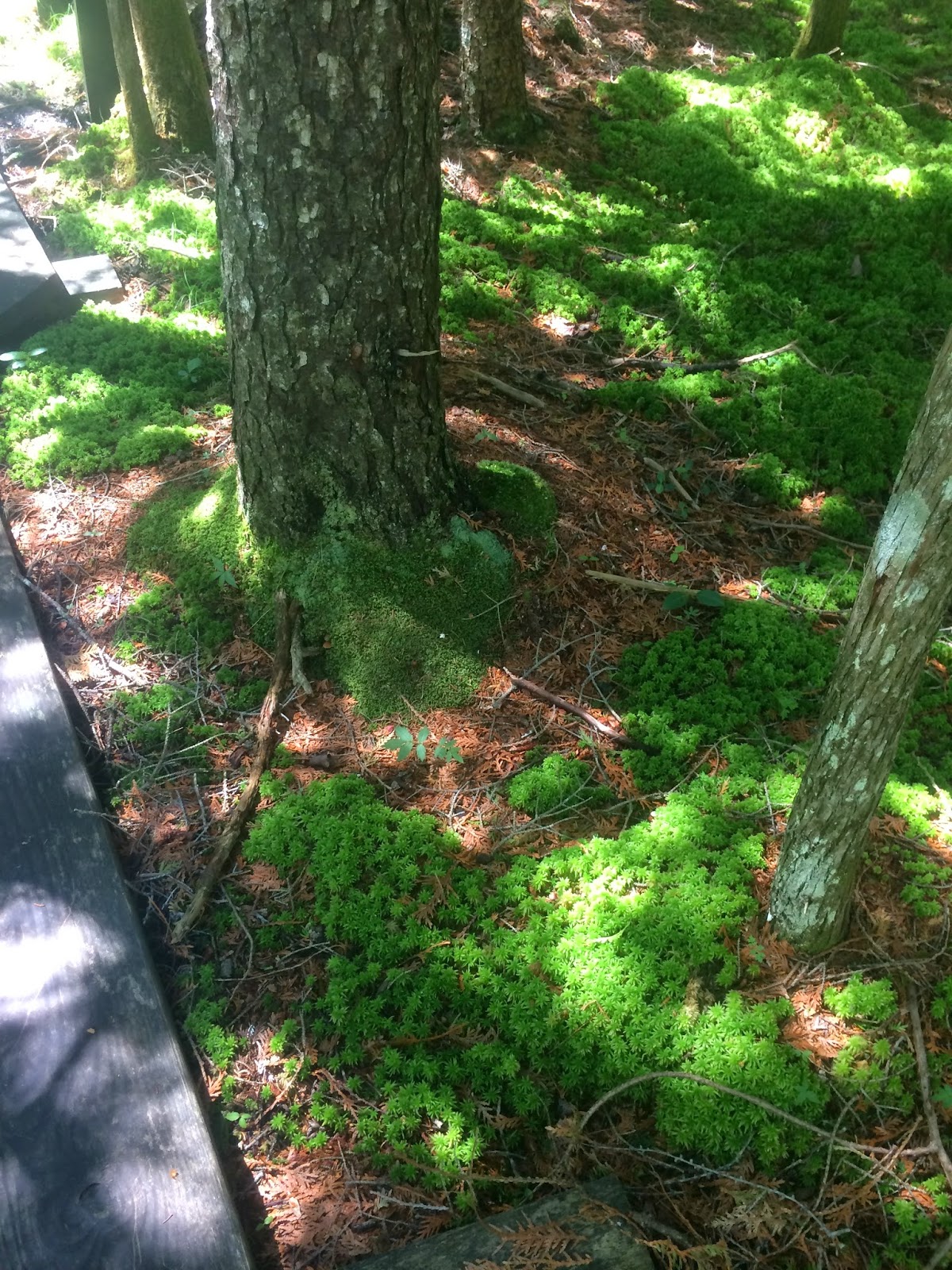 I'm not really sharing here everything I learned in this past week
beacuse I'm still sorting it out in my head.

On the last night we were asked what plans we all had for continuing our study of lichens.
A list I had made the night before that included materials to get and
projects and experiments to conduct continue to fill my head as I catch up on rest.
Some of which include obtaining a microscope, chemicals, and lichen books.
And a personal research project I can start here on Peaks Island by taking a survey of lichens present right now.

I'm so excited about everything I learned! I'm going to continue to research and gather dye lichens in my area and in California's Bay area and the Sierra- Nevada foothills where my in-laws live. And anywhere else I wander into. Oh! Like New Mexico in the fall. See, it never ends:) 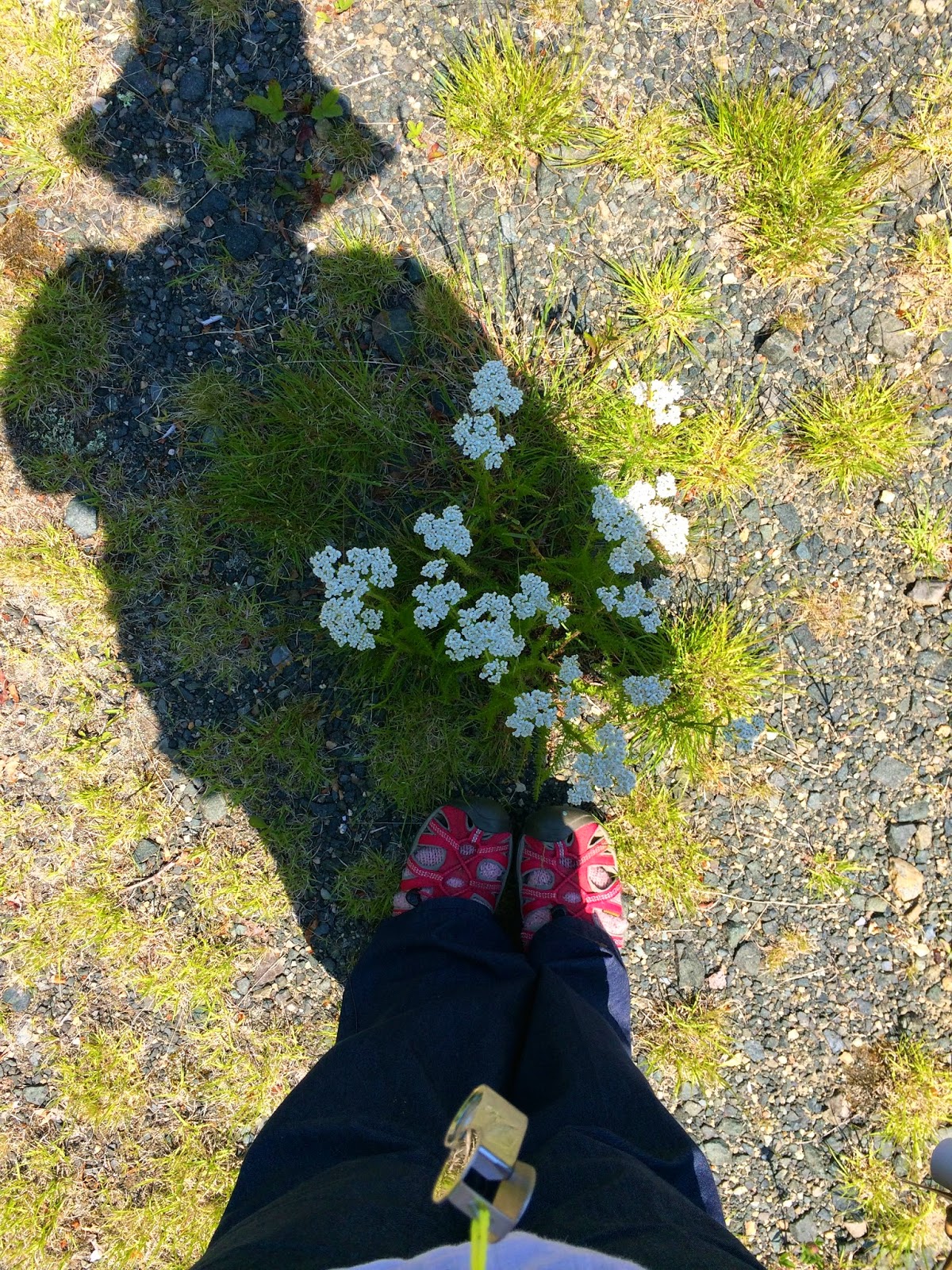 I could really go for a jam tart right about now ;)

I adore this post. Thank you for sharing your adventures.

The word is "pipette." I remember it from chemistry class long ago.
Enjoying your enthusiasm.