Dyeing has been on the brain a little more than usual lately.
I've been preparing for my week at Medomak
where I'll teach a few dye classes including my Foraging for Color class.

Well, today while taking an impromptu but very necessary trip into town for antibiotics for our ailing kitty, I was very happy that I remembered to pack my scissors and plastic bag into my purse.
Just in case I felt like foraging, you know. 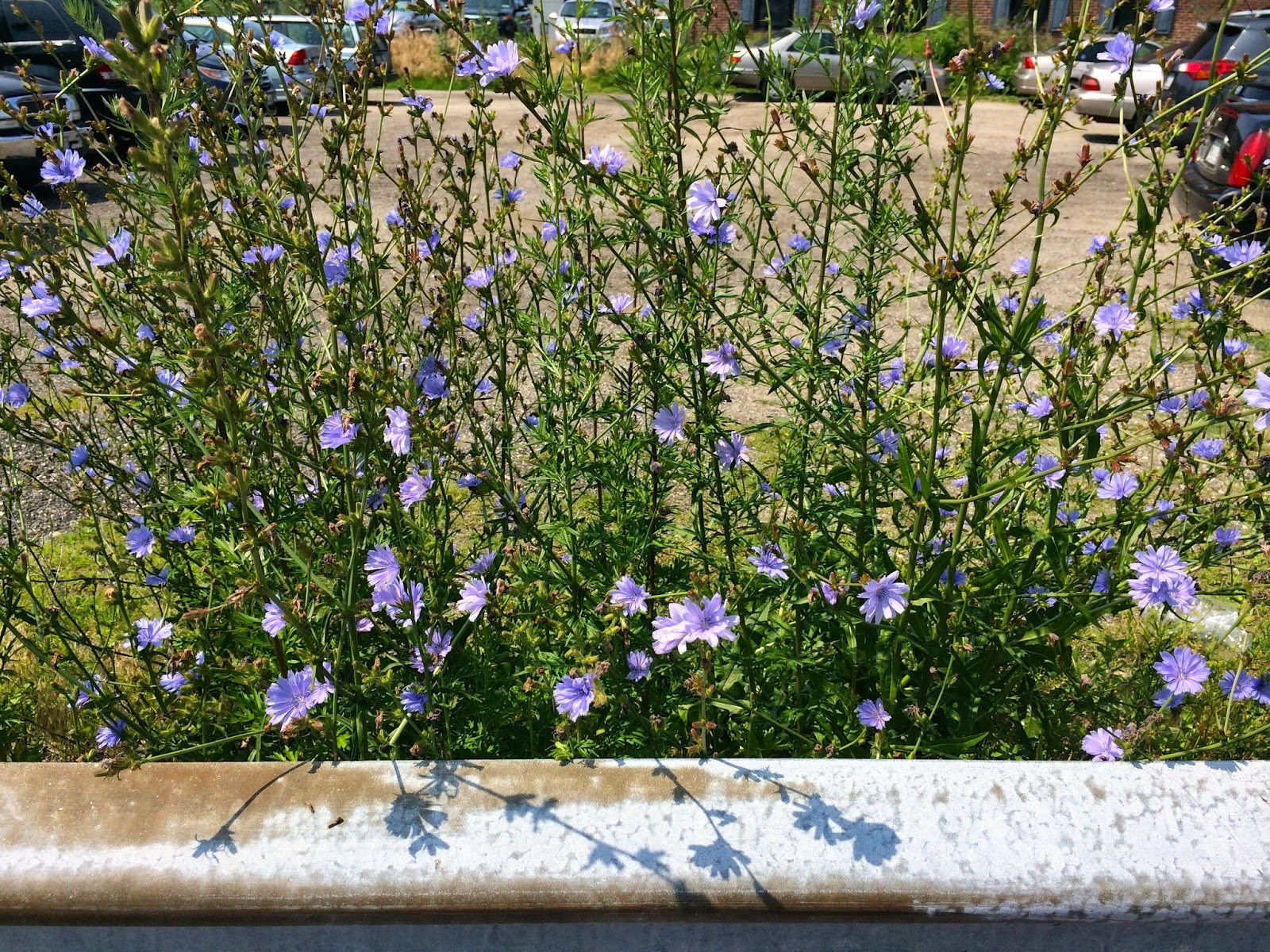 I collected some chicory Cichorium intybus. Belonging to the Asteraceae Family.
I have been admiring this road side weed ever since I first noticed it in Nova Scotia, 10 years ago.
At the time, I had picked some, brought it back to my B and B and tried to paint it.
I didn't get very far as the flowers faded and wilted very soon after picking.
And since I started foraging for dyes back in 2008, I've been meaning to try chicory as it grows in many sidewalk spots here in Portland. 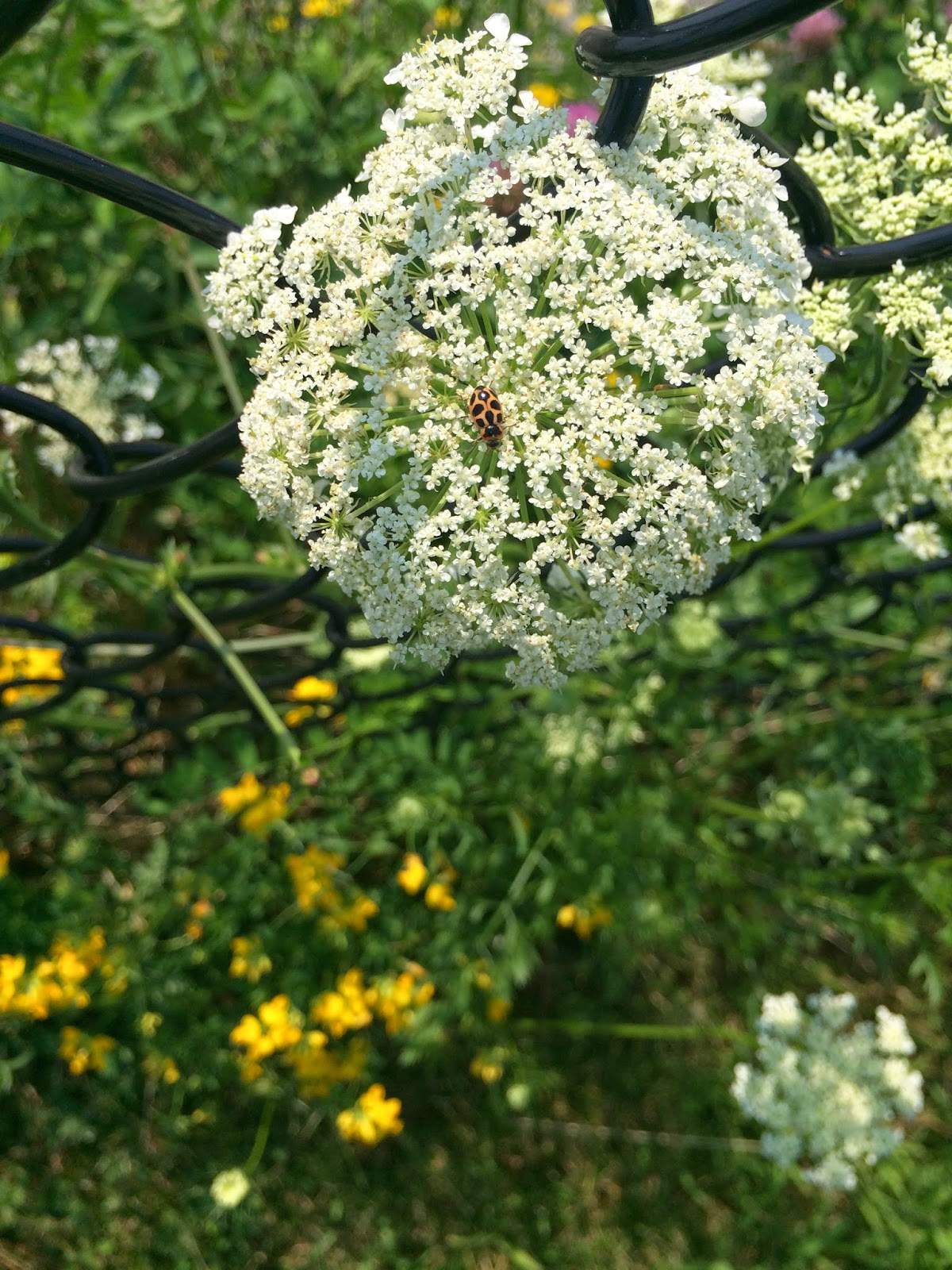 While making my way back, I spent some time with Rebecca Burgess's Harvesting Color book.
While also sitting in my favorite spot on the ferry.
I've owned this book for several months now and I am stil going through it.
I love the lay out and the message it brings to dyeing.
I've been inspired to collected plants from my yard and do as many as I can stand, beacuse there are so many. That may happen this weekend.
Also, As I live in a place where I am surrounded by salt water, (I know, poor me), I'm going to (one of these days, collect the sea water to use in my dyeing. 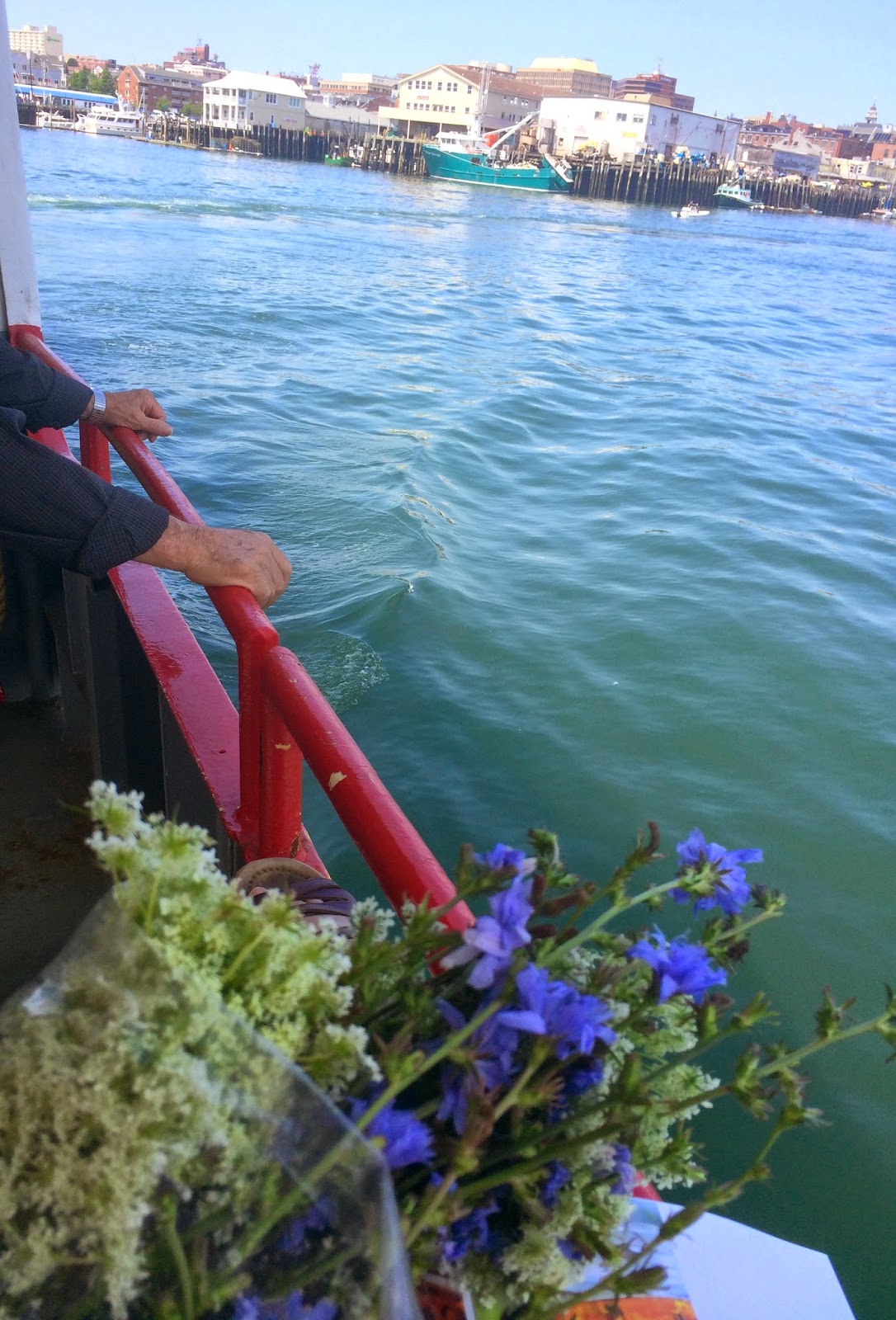 Once home, I attempted to revive the chicory and queen ann's lace until I needed them. 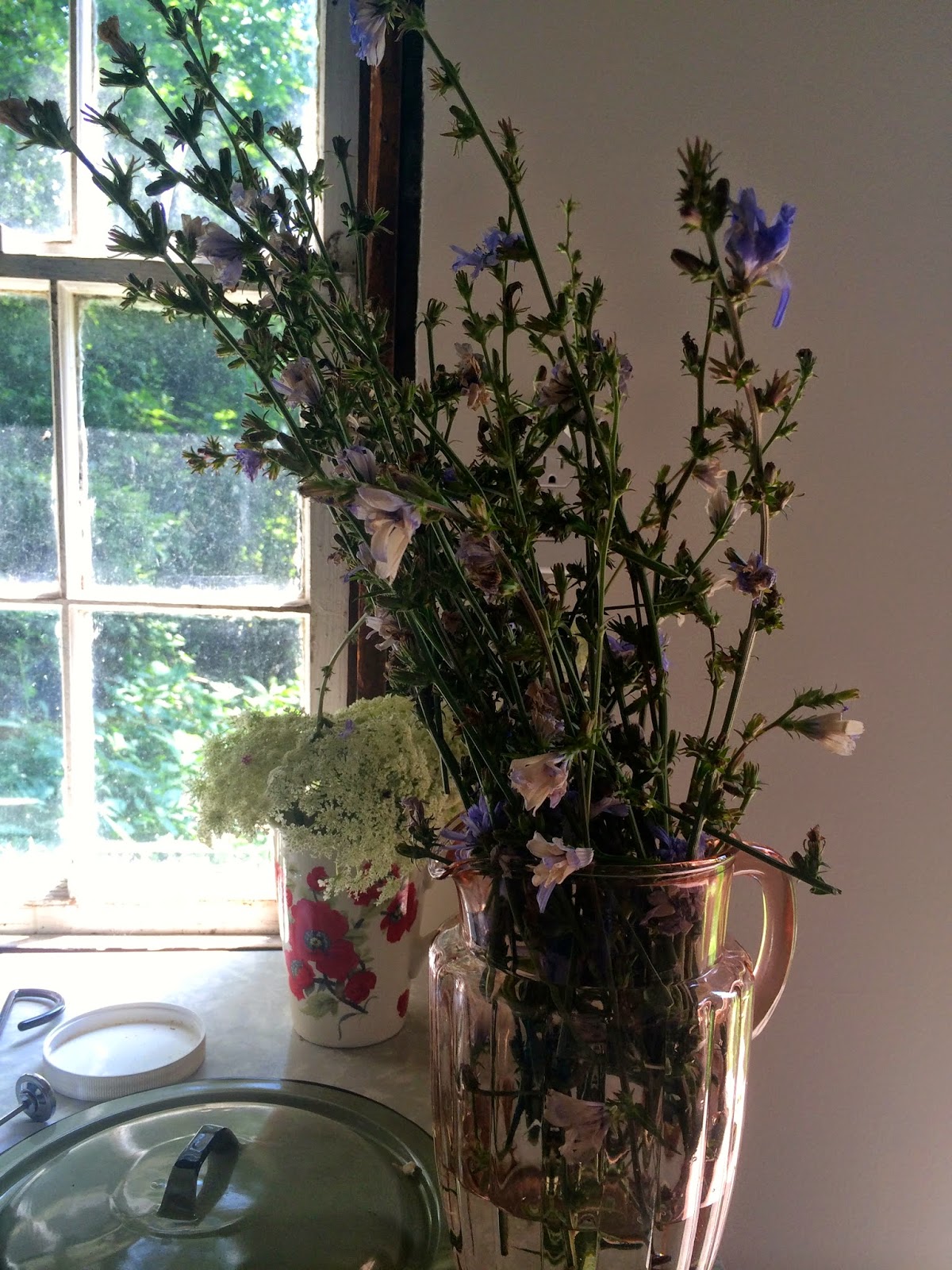 I just love the smell of queen ann's lace AND the pink, red, purple, or black spots in the middle.
Sometimes I just stare at these spots,
wondering,
why are they there?

I want an answer other than
"it's queen ann's blood". 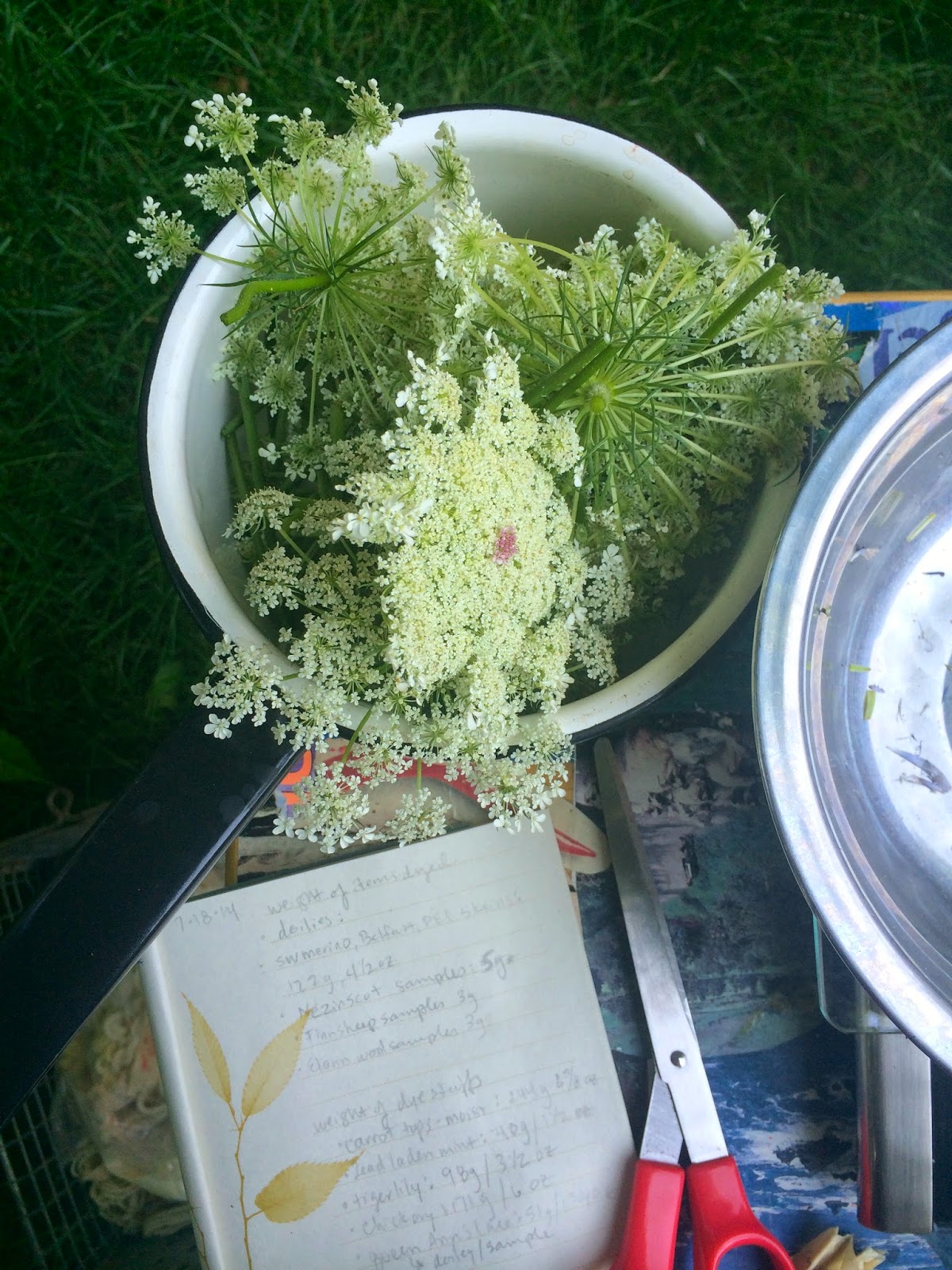 I noticed a few weeks ago we had some tiger lilies, Hemerocallis fulva.
Belonging to the Xanthorrhoeaceae family.
They grow along the back side of our property.
I collected the flowers that were just past/ dead heads.

Popped them in a large glass jar and added water.
A while later I decided to add more water and
then noticed this pale moth right on top.
Almost blending in.
I set it free. 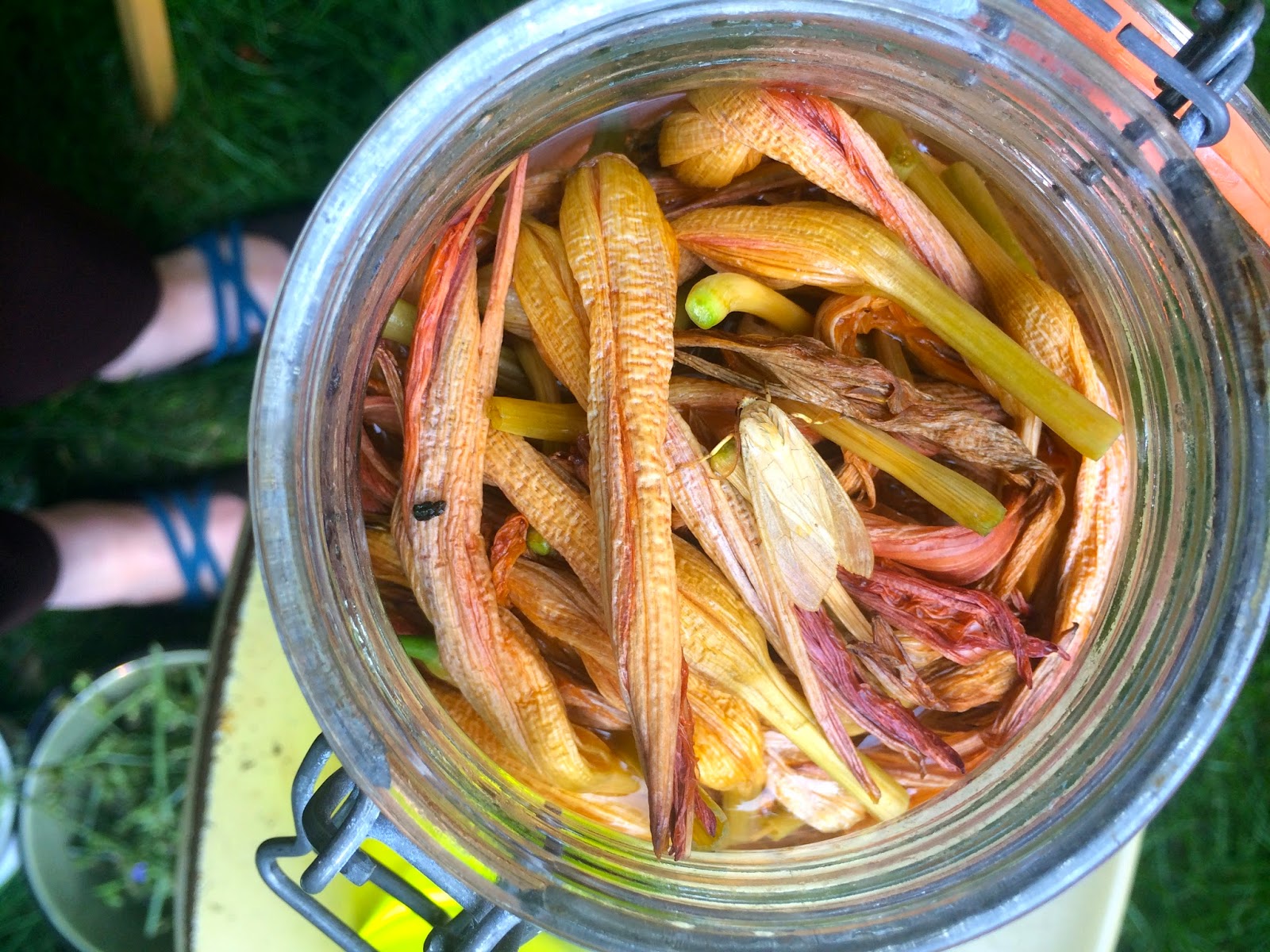 I'll let the solar bath go till early next week before I decide if I want to add direct heat.

I also got the idea to use this misfit mint.
It's been growing out of a broken pot with no bottom.
I realized I should stop consuming the mint when I remembered the soil right around our house probably still has some lead in it from when the house had lead paint long ago.
I've since planted 3 other varieties of mint in boxes.
But this misfit mint kept right on growing dispite the fact that I dumped it behind our house.
I'll also let it go till early next week and then add direct heat. 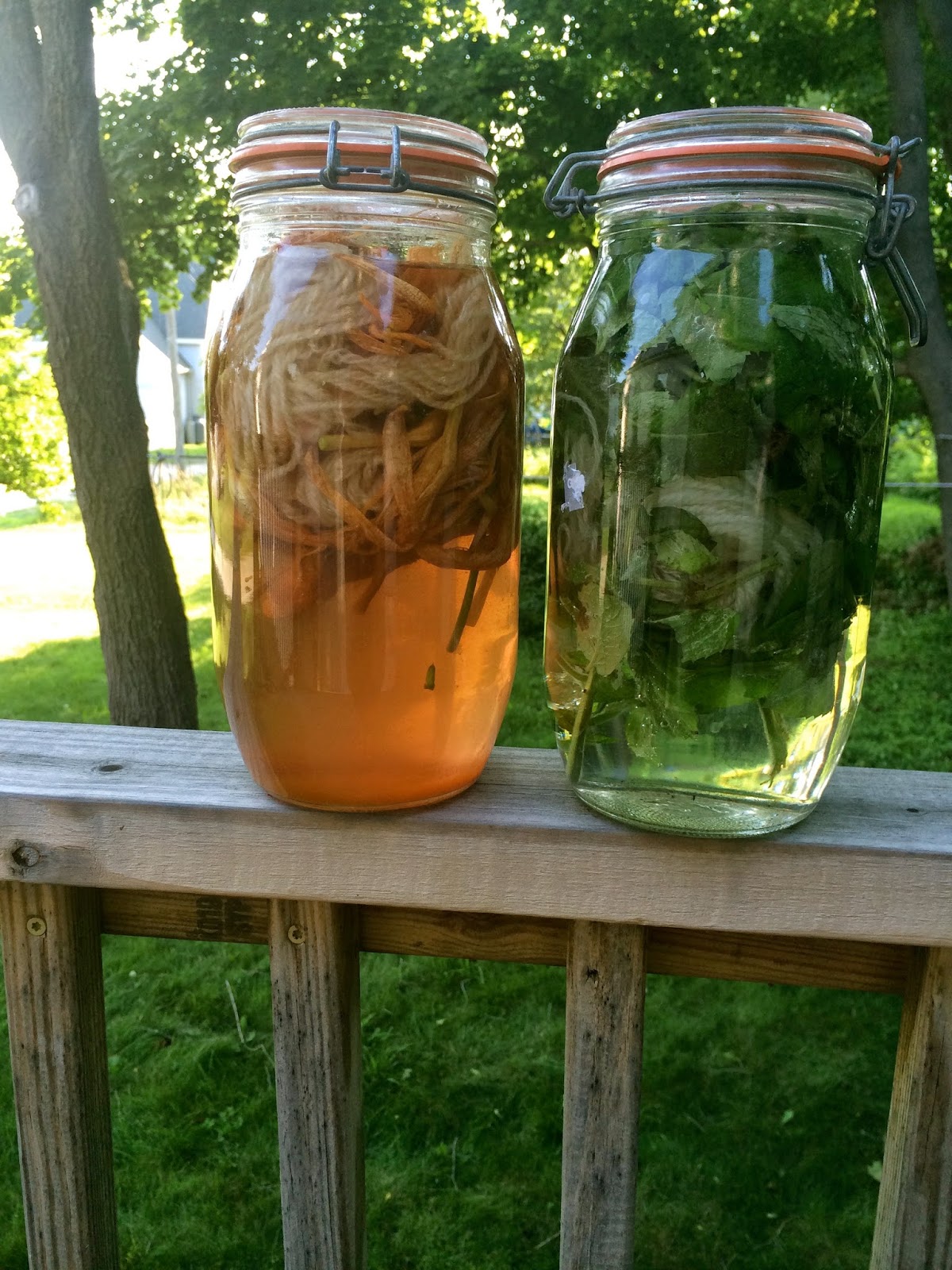 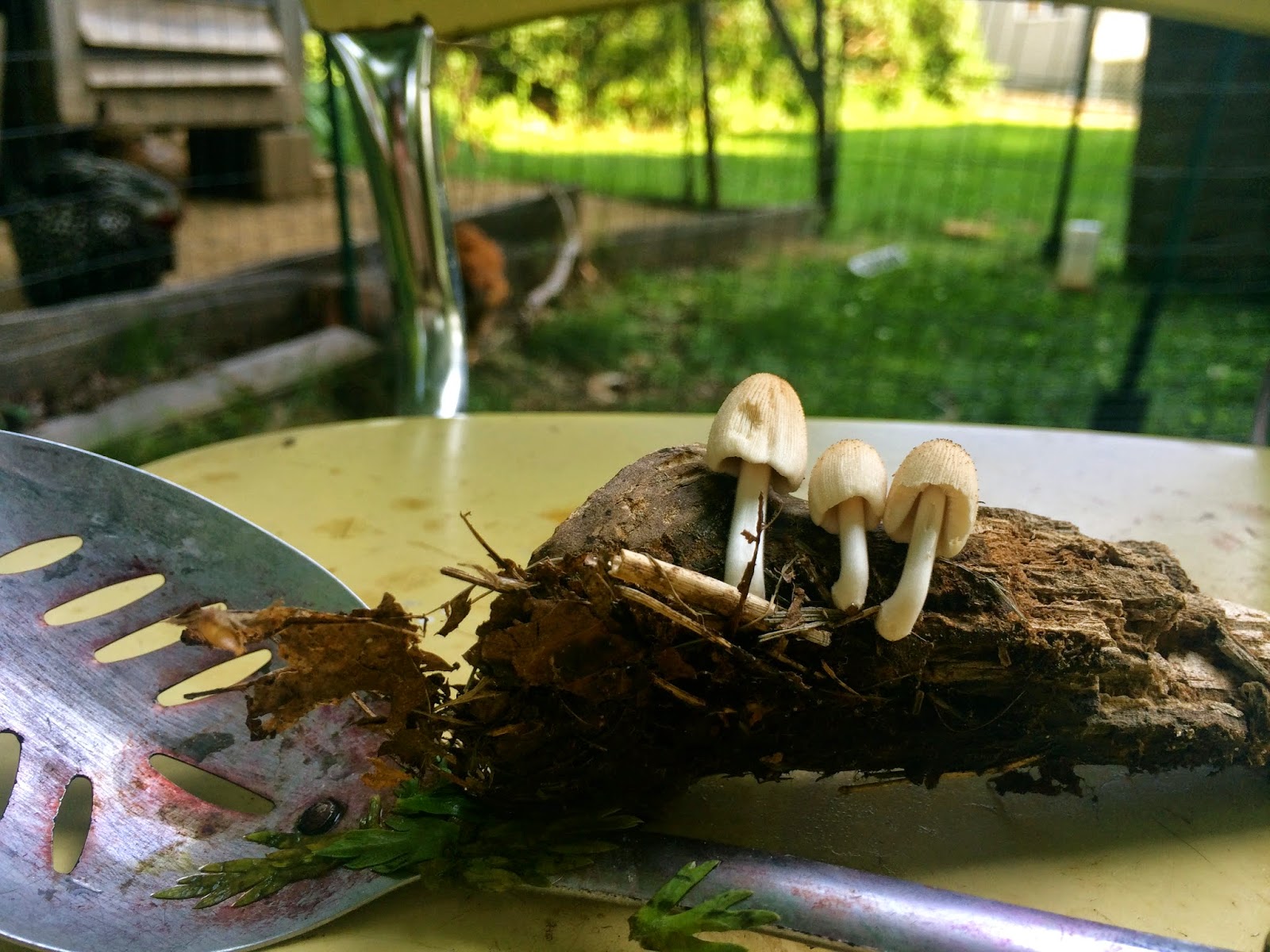 Along with the above mentioned, I also revived 3 pots I had used a month ago.
Madder, cochineal and onion skins.
And last but not least, I got to the avocado pits and skins going that I started soaking a month ago.

Tomorrow morning I'll check on all the pots
as this is my favorite part!!
The morning after when everything has cooled down and it's all had hours to soak up
lots of pigment. 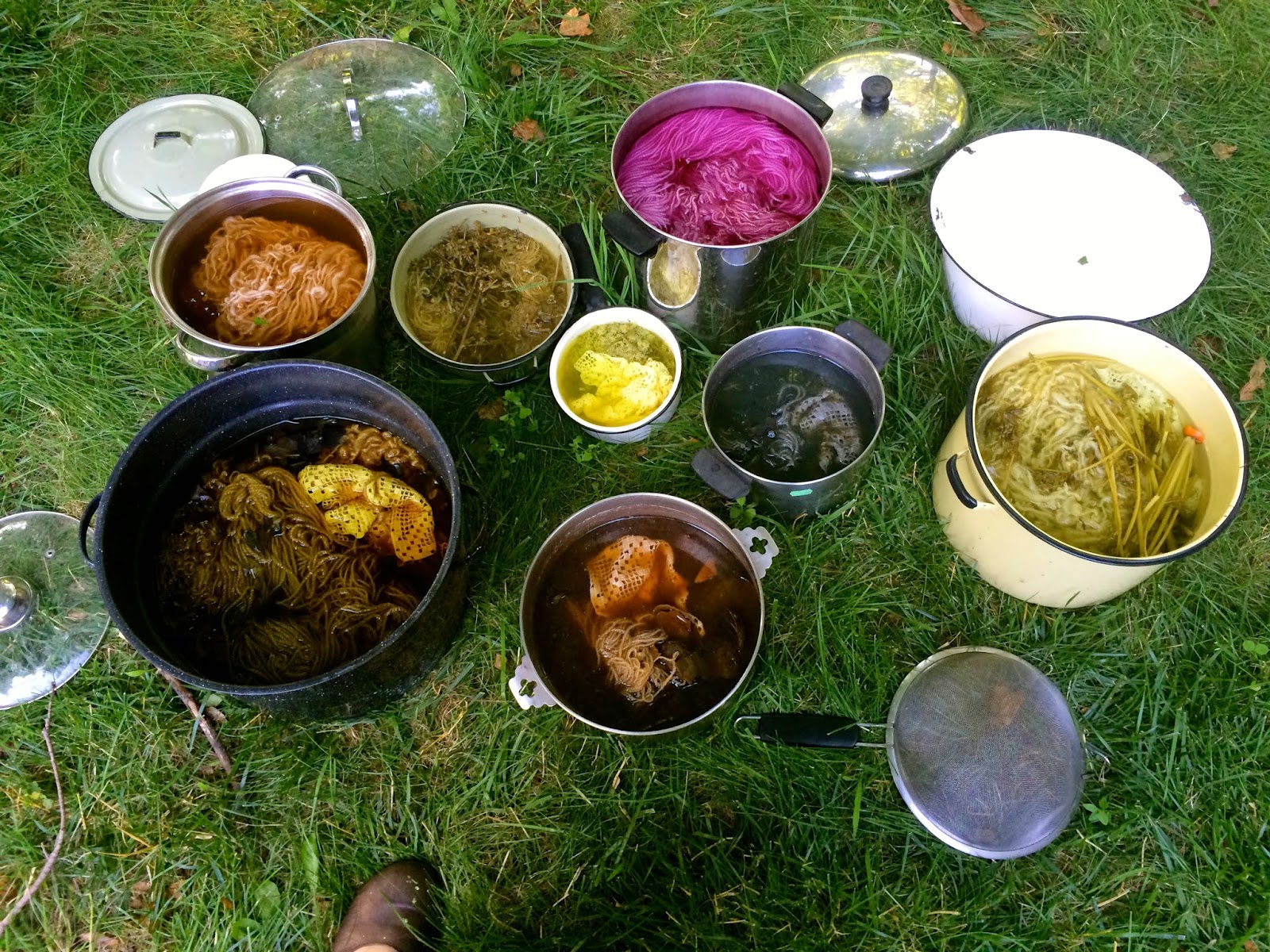 As I set eveything up in my back yard
I moved much slower than usual.
I think it was partly beacuse it was hot out
but also I was very aware that I had many dye plants I
wanted to use today.
It felt like the slower I moved the easier it would be for me to remember everything I wanted to do.

It paid off in the end, though I was very tired and worn out after 3 hours of walking back and forth.

I got word from my husband who was in town running errands that he'd be home on later boat.
With it being about dinner time, I went inside to fetch the last slice of our left over pizza
(which I had for lunch too).
I pulled up my stool and stared at the last pot simmering away.
It was the chicory pot and I was pleasantly surprised at how fast the color seaped out in the small yarn samples and that it looked like light sage green. 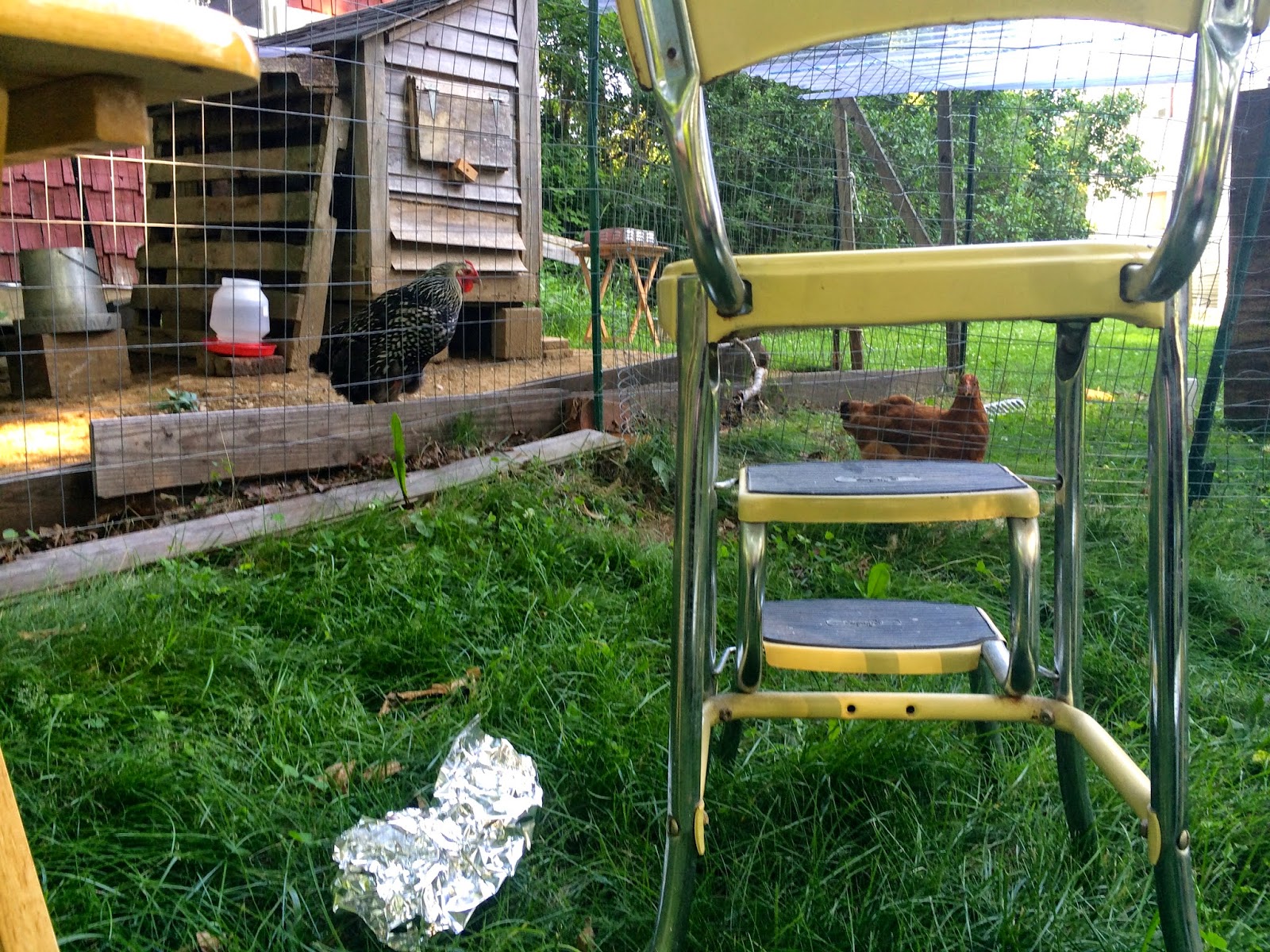 I then turned my stool around to visit with my chickens and was easily amused at their grooming methods.

I threw bits of pizza crust at them. The little chick curiously pecked at her little bits with calm politness.
As if she was in a fine restaurant.
While the two older hens dove with wild abandon like they had found nuggets of gold. Then the one who didn't get the piece would give the one who did get it a look like "Hey! That had my name on it!!" While also taking a tiny step forward into the other's bubble of personal chicken space.

Then, when my back was turned checking my chicory pot for the last name,
I heard a belch.
From a hen.
They really love pizza crust.

Till next time- tomorrow will be all about checking out the afterbaths and seeing what's usable again
AND cooking up some lichen pots too
I've got a few pounds of hand spun Irish Texel to dye up!