I was so happy and filled with creative hope when I peaked behind my roll up shade after creaking out of bed this morning. Last night Jubal and I made the short walk to the Inn on Peaks for a cheese burger and fries which is very good I might add. The snow was just coming down and it was lovely and quiet outside. The snow didn't stop and left a lovely fresh carpet for the morning. I hear that some kiddos around the state had a snow day which always warms my heart. Since I moved out here at the end of August, I knew I would relish the day when snow fell, I had no plans to leave the island and I could create all day- with snow coming down. For some reason my creative senses feel especially saturated with snow or rain falling. It really means I don't have any reason to go out side. And now it feels extra specially good because we've gone for a walk around the block all ready and picked up eggnogg at the store. 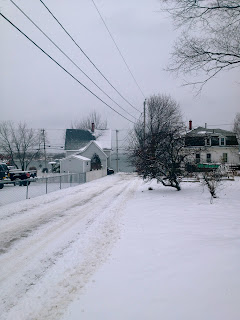 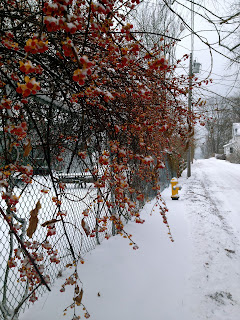 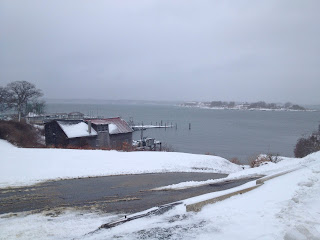 I enjoyed looking around at trees and berries pondering what I might be able to get away with foraging for dye. I've been thinking of collecting the rest of the good looking rose hips for a boil up and dye. I also pondered the bittersweet. Earlier last week we came across a bush of black berries that when squeezed with my fingers are actually purple. 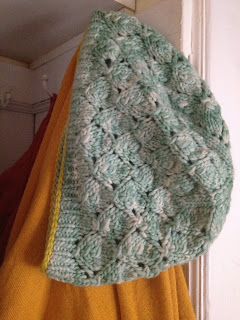 I made this hat about a months ago from a really fun and easy lace pattern that I found here which is the Foliage pattern by Emilee Mooney. I used Manos Del Uruguay Yarn in Oxygen and the rib in Spirulina. Beautiful color combination. Both of which I purchased at my favorite yarn shop, Knitwit. 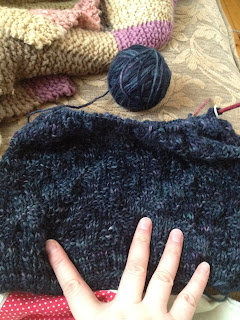 This hat has been quite a work in progress for the last two weeks. After pouring over my new book, Super Sticthes, a knit stitch dictionary, I knew I wanted to create a hat using a stitch pattern I'd never done before. I decided on the Chevron pattern but having never translated a flat pattern to circular, it took many test runs, frogging, and explicits. I finally looked up what to do in this case and learned that in order to turn a flat pattern into a round pattern I must work backwards and opposite. I took the time to rewrite the pattern and then learned all I needed to do was knit each odd row twice as it was the same! It did make it more fun and not quite so frustrating. I was going cross eyed, sea sick and turning into a fox faced sailor (foul mouthed). The yarn however, though I enjoy using it a lot, may not show the pattern after all. Blocking will take place after I complete it then I'll know. The yarn is 100% alpaca and has been over dyed twice. It was originally a variegated denim. I wanted to add more fun to it so I splashed in some green and purple. It kind of only darkened it but I like it:) I'm not one to take my time to knit fine but I'm working on new skills. 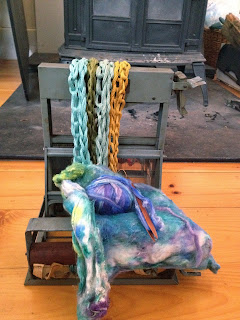 This will be my next project one that I have not been able to stop thinking about since I brought this sweet little loom home. I picked up some pearl cotton for the warp which I may to today. For the weft I'll be using my hand dyed silk hankies.

I used to feel quite overwhelmed if I had an unfinished project hanging around and I wanted to start a new one. I felt like I had to finish the first one before I started the second one. I've gotten over it though and find it quite freeing to have a few to several floating around and going back and forth to weaving to sewing to knitting to spinning to felting like a bird collecting for her nest. It's felt good to come into my own natural process for creating.

You are amazingly amazing, and oh so inspiring! Guess what? I've picked up my knitting again. I'd love to set a date to come see you...in the new year!